Back to the Future III 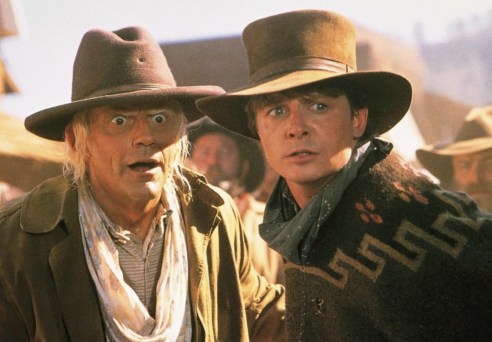 Awesome – as per usual.

In this epic finale, we are thrown back to the old west! 1885 to be exact, where Doc is now trapped but “happy”. However, since receiving this letter (which was handed down through the postal service for many years) Marty had found Doc’s (of 1885) grave – he was shot by Biff’s great grandfather only six days after writing the letter. So he goes back to save him.

Wow! Another complex storyline, is it not? In a totally awesome way of course!! This is the crazy world of the 1800s – every man for himself – Marty turns up, meets his ancestors and hitches a ride to the local town where he finds Doc as a blacksmith and explains to him of his untimely death.

The sets are fantastic! With beautiful horses and incredible stunts, too. This is a romantic tale with a rough exterior where we try to get back to the future with Doc – with some help of a train. Although, of course, not everything quite goes to plan… 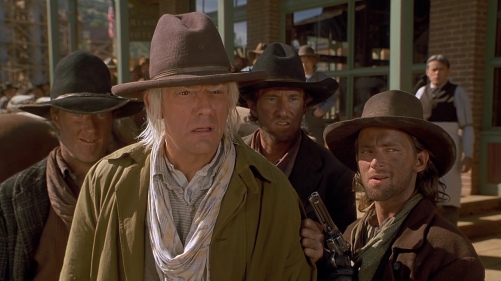 I really enjoyed the final of the series because it was back in the past which is always more accurate and a plot is much more easily structured upon real events creating the humour of certain minor changes in American history.

I never doubted Robert Zemeckis’ films, and I never thought he would make terrible sequels which is usually what happens or is expected. This is another exciting journey with a satisfying ending to the fantastical trilogy.

I am a journalism graduate (2014) from New Zealand. Currently working in marketing, and writing fiction in my spare time. I love to write about movies on this blog when I can. I also do paid reviews and voiceovers via Fiverr (nzfilmfreak).
View all posts by NZ Film Freak →
This entry was posted in All Film Reviews, Date Night Movies, Editor's Pick, Family Films, sci-fi and tagged 1885, 1955, 1985, back to the future, Christopher Lloyd, film, film review, Lea Thompson, Mary Steenburgen, McFly, michael J Fox, nz, review, robert zemeckis, sci-fi, Thomas F. Wilson, time machine, time travel. Bookmark the permalink.

6 Responses to Back to the Future III