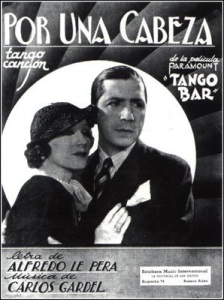 This is a fantastic classic.

After watching this scene (tango scene in Scent of a Woman) I wanted to take tango lessons! Yet, I don’t think it was the visuals, but the song that made me fall in love with the scene.

Por una Cabeza (“By a Head”) was written in 1935 by Carlos Gardel and Alfredo Le Pera. Originally with lyrics, it tells a story about a gambler who compares his love of women with his addiction of betting on race horses.

I think it’s the whining instruments that makes the piece sound like it’s yearning for something, like the song is telling a story of losing somebody… I don’t know. It’s awfully touching though!

This is the best version I have found, I think it’s the French accordion that completes it.

I hope you enjoy it just as much as I do!

You can read my review to Scent of a Woman here. Including the trailer.

I am a journalism graduate (2014) from New Zealand. Currently working in marketing, and writing fiction in my spare time. I love to write about movies on this blog when I can. I also do paid reviews and voiceovers via Fiverr (nzfilmfreak).
View all posts by NZ Film Freak →
This entry was posted in All Music Reviews and tagged 1992, al pacino, awesome, Carlos Gardel, connie, film, film review, freak, music, nz, Por Una Cabeza, review, scent of a woman, song, tango. Bookmark the permalink.