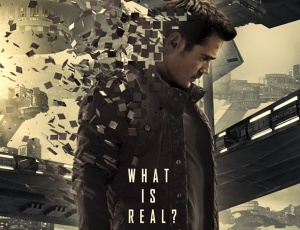 So, it was between watching Total Recall or Bourne Legacy. I am not a fan of action so after watching the trailers I decided on Total Recall based solely on the fact that it mentioned dreams. Due to being an Inception fanatic, I decided that this action film would be the best choice.

It was alright. Not great. But not unbearable either.

The overall exterior urban sets were pretty much Blade Runner – a futuristic Asian city with bright lights and pouring rain. Just to make sure that you knew that it was set in the future, they threw in a few flying cars… Just in case you weren’t sure. My friend said he was surprised there were no laser guns to further reinforce the time era.

There were a few cool things though, like the plate in some of their hands that was a tracker/phone and when their hand was placed on a piece of glass, the image of the caller was projected onto the glass.

I think that the two main women characters should have been made to look a little more different… Two tall long-haired brunettes running around begin to look like the same one after a while. 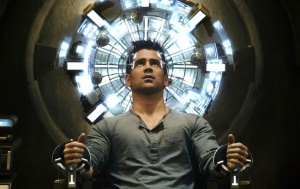 I suppose I wasn’t really emotionally invested in it so I didn’t get worried when the protagonist was in a spot of bother, nor did I feel a relief when he got himself out of a sticky situation. Perhaps this was because I didn’t see the original film with Arnold Schwarzenegger in it, or because I’m not a fan of the genre. However, I think a vital issue was that it was so predictable. It was the standard stereotypical structure of an action film which left nothing to the imagination.

A few typical characteristics of action films (including Total Recall) were:

There is a big question at the end, of course. Was it a dream all along? But due to the lack of ‘minor details’ to back up either theory, I found that it really did not matter either way. Unlike Inception where the end was debatable with lots of nit-picky bits to back yourself up. (“The spinning top was tipping at the end” or “the memory was identical to ‘real life'” etcetera… ).

If you’re in to a bit of action and a bit of sci-fi, or you enjoyed the original, I’m sure you will like this film…

But it just wasn’t my cup of tea.

I am a journalism graduate (2014) from New Zealand. Currently working in marketing, and writing fiction in my spare time. I love to write about movies on this blog when I can. I also do paid reviews and voiceovers via Fiverr (nzfilmfreak).
View all posts by NZ Film Freak →
This entry was posted in action, All Film Reviews, Guys' Night In, sci-fi and tagged 2012, action, arnold schwarzenegger, connie, film, film review, freak, inception, movie, nz, review, sci-fi, Total recall. Bookmark the permalink.