I love these films. The kind of stories that are based on a character’s life adventures are the most inspirational because the scripts tend to be quite philosophical. Forrest Gump is, of course, a very innocent story of a man’s journey through his life. The hurdles and the triumphs are all narrated by the protagonist Forrest Gump (Tom Hanks).

Forrest Gump is a film that shares the genre with the likes of The Curious Case of Benjamin Button, Big Fish and perhaps Driving Lessons. It’s those life stories that remind you of the stories that your grandparents’ would tell you. The morals, meanings and journeys that are motivational and inspirational make great films because they are believable and fascinating.

Forrest (Hanks) and Jenny (Wright) take two very different paths in their lives, but their paths frequently cross as if they are drawn together.

Tom Hanks is an amazingly talented actor, so it’s no wonder that he makes a fantastic Forrest Gump – the innocent, yet dim, Southern man who only has three important things in his life; his Mother (Sally Field), his love, Jenny (Robyn Wright – incredible actress!) and God. His simplistic life takes many strange turns as he brushes among some of America’s major historical occurrences from the Vietnam war to exposing the Watergate scandal. As well as meeting the likes of  President John F. Kennedy, Elvis Presley – ending up influencing Presley’s dance moves – and John Lennon; consequently helping to inspire his hit song “Imagine”.

Sorry it’s a bit out of sync.


Forrest is such a likeable protagonist because of his lack of prejudice or anger toward others. This movie is based in the fifties and sixties in the South during the height of racism, but Forrest Gump has no part of it. He literally treats everybody the same, completely ignorant of their look, their race and beliefs. 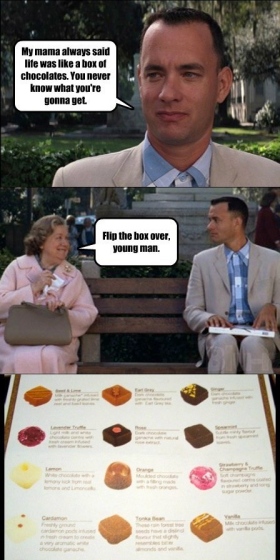 There are some very sad scenes, but that is what makes Gump’s story so real. Although there many mockeries and memes at Gump’s expense, you can’t deny the script has many pearls of wisdom. Analysing fate and the existence of God, life and death – represented by a feather blowing in the wind. So deep!

Considering that this film was made in the nineties, the technology-use is absolutely fantastic! It has been made so incredibly well – I don’t see how it could possibly be improved by today’s technology… And ‘no’ making it 3D does not necessarily improve a film.

I have the soundtrack that I thoroughly enjoy. Alan Silvestri is the composer who has captured the feel of Forrest Gump very accurately. On the soundtrack are many popular sixties songs and artists including Lynyrd Skynyrd, Elvis Presley, The Youngbloods and Joan Baez. Incredible compilation!

It’s great that the drama and philosophical self-reflection is balanced out by the comedic scenes involving Forrest’s naivety, and the heart-warming moments between Forrest and Jenny. At almost two and a half hours long, this is not a film one would watch to chillax and unwind. However, it is certainly a fantastic film to have in the DVD collection at home. It is easy to get emotionally invested in as the characters are so animated and realistic.

I am a journalism graduate (2014) from New Zealand. Currently working in marketing, and writing fiction in my spare time. I love to write about movies on this blog when I can. I also do paid reviews and voiceovers via Fiverr (nzfilmfreak).
View all posts by NZ Film Freak →
This entry was posted in All Film Reviews, drama, Editor's Pick and tagged 1994, awesome, benjamin button, connie, drama, film, film review, forrest gump, freak, jenny, movie, music, nz, review, song, tom hanks. Bookmark the permalink.