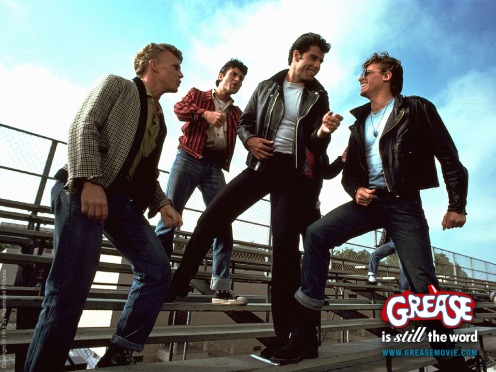 I have never really been a fan of musicals, but Grease is certainly an exception and an all time favourite of mine.

Musical or not, its fifties costumes and authentic hair-dos are enough to make me love this optimistic film. I love this era and it’s portrayed in the most idyllic light. Obviously Grease is essentially a stage play which isn’t lost in the movie form with the occasional fourth wall barriers lost.

Based in a high school environment, the seventeen and eighteen year old characters were almost unconvincingly played by actors in their late twenties and early thirties. But the whole shebang is so up-beat, colourful and exciting that you forget that the ages are totally wrong.

It’s a great musical because it is full of colour and lovable characters, who although are stereotyped, are easily relatable. Especially the Pink Ladies, but perhaps the T Birds were not explored individually quite as much. 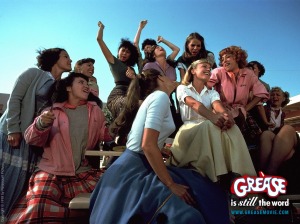 Unfortunately each of the Pink Ladies has quite a negative moral to them.

Sandy (Olivia Newton-John): You need to change and fit in to be noticed and respected.
Rizzo (Stockard Channing): Sleeping around gets you attention. Getting pregnant is a risk, but hopefully that won’t occur, and celebrations are in order whenever she realises she isn’t pregnant. Don’t bother learning your lesson.
Frenchy (Didi Conn): A little bit ditzy and attempted to break away from the crowd and do something different. However, this was too hard and frowned upon by others, it is best to stick with the crowd.
Marty (Dinah Manoff): A little arrogant and an attention seeker who is very much into her looks. Her cold dispostion is attractive to men.
Jan (Jamie Donnelly): The unattractive ‘fat’ one. Except, she’s tiny and clearly on the lower end of the average weight scale. Staying super skinny is attractive and eating in general is clearly frowned upon.

Looking deeper into Grease, it is clear that the morals are not to be desired. Not moving forward or being different is certainly a bad thing. But, Grease is supposed to be quite a two dimensional film that is simple and entertaining. Stereotypes and happy endings make feel-good movies, which this certainly is.

John Travolta and Olivia Newton-John are two great actors and singers for sure! But have you heard their reunion song!? It is so sad! They should be so proud of their accomplishments in Grease, but let’s leave it in the seventies, guys.

If you want to cringe and ruin your ideals of the two protagonists of the famous musical, feel free to watch their 2012 song:

I don’t like Travolta at the best of times – his hair looks like it’s painted on and his eyes are too blue. But this is just toe-curlingly bad!

The soundtrack has many lovely sing-a-long songs with my favourites being the comedic Look At Me, I’m Sandra Dee sung by Stockard Channing (Rizzo) and We Are Together. But my above-all favourite song is Blue Moon, I’m not sure who did this version, but it is certainly my favourite (*gasp!* even better than Elvis Presley’s!).

It is a very fun, very uplifting movie that isn’t supposed to be read into too much. It was popular when it was first released in the seventies and it will continue to be extremely popular throughout future generations, I’m sure.

I am a journalism graduate (2014) from New Zealand. Currently working in marketing, and writing fiction in my spare time. I love to write about movies on this blog when I can. I also do paid reviews and voiceovers via Fiverr (nzfilmfreak).
View all posts by NZ Film Freak →
This entry was posted in All Film Reviews, Girls' Night Movies and tagged 1978, 2012, awesome, connie, danny, film, film review, freak, grease, john travolta, movie, music, musical, nz, olivia newton-john, pink ladies, review, sandy, song, t birds. Bookmark the permalink.