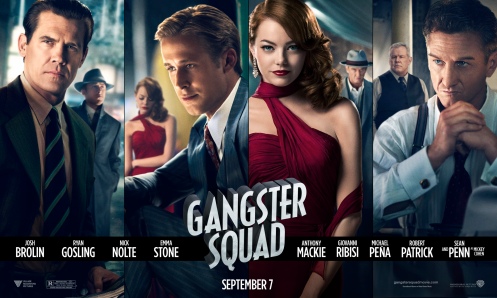 Wow! I was so looking forward to seeing this and boy was it worth the wait!

It certainly reminded me of Public Enemies (featuring Johnny Depp) for obvious reasons; both based on a true story, both take place in the forties involving Los Angeles gangsters. However, the stories are clearly different.

Emma Stone and Ryan Gosling reunite again since Crazy, Stupid, Love. Both of them are fantastic together once again. Two of my favourite actors, for sure!

A very appropriate choice of lighting (or lack of) on the director’s behalf which made the feel of the movie accurate. It was rough and dangerous, yet still attractive. I am sure that the amount of people who smoked in that era was not exaggerated in the movie, too. Every interior scene was smoky, which was not only historically accurate but very artistic as it diffused the harsh lighting within the dim rooms.

I remember mentioning that I thought that there was not enough car chases in the incredible forties vehicles in Public Enemies… Well, it is safe to say that there are plenty in this movie. At least 60% of the movie are car chases or gun fights.

Unfortunately, I have to mention that the gun fights began to go on for a bit too long within some parts, stopping and starting all over the place with very few people ever getting hit by bullets. Perhaps taking the attention away from the more personal stories that could have been developed further, meaning that attachment to the characters was not quite as possible as they could have been. I think to make the gun fights more attention grabbing, some more slow motion action would have been effective.

Overall, a very exciting film set in one of my favourite time periods. A time with incredible fashion, immaculate cars and terrifyingly powerful gangsters.

I am a journalism graduate (2014) from New Zealand. Currently working in marketing, and writing fiction in my spare time. I love to write about movies on this blog when I can. I also do paid reviews and voiceovers via Fiverr (nzfilmfreak).
View all posts by NZ Film Freak →
This entry was posted in All Film Reviews, Date Night Movies, drama and tagged 2013, awesome, connie, emma stone, film, film review, freak, Ganster Squad, lapd, movie, music, nz, review, Ryan Gosling. Bookmark the permalink.