Probably the best high school based film. Openly addressing and mocking their stereotypes and the pressures each one of them are under by their associated peers.

It is a very well made film because it is entirely based in one place during one day, with a tiny cast. We are sitting in on a Saturday detention with five completely contrasting students who soon find out what they hate and what they love about each other and themselves. Very human, very emotionally rooted.

The cheerleader type referred to as ‘the princess’ named Claire (Molly Ringwald).

The jock referred to as ‘sporto’ named Andrew (Emilio Estevez).

The kook or ‘the basket case’ named Allison (Ally Sheedy). 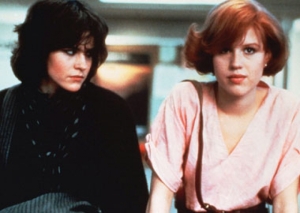 The Kook and The Princess

What is great about these characters, is that we can see qualities in ourselves in all of them. They are a mirror image of the teenage audience. We all know somebody with qualities like them, we all find some of them in ourselves and we all find characteristics in them that we want to possess.
Despite being about five typical stereotypes, by the end of the movie, you realise that they are a group of misfits who don’t want to belong to a group who tells them who to be.

I think if there was an extended version of this movie, it would be how each one of them over came the pressure of their groups and openly hung out with other cliques, because they’re all strong characters who would become role models. Well, that’s what I would like to think would happen anyway.

It’s true, high school really does suck. But this movie will make you feel better about it.

Jodie’s rating: 8/10
I would just like to say that they have excluded all of the funny bits in this trailer, so if you like the look of this, you’re going to love the film.

I am a journalism graduate (2014) from New Zealand. Currently working in marketing, and writing fiction in my spare time. I love to write about movies on this blog when I can. I also do paid reviews and voiceovers via Fiverr (nzfilmfreak).
View all posts by NZ Film Freak →
This entry was posted in All Film Reviews, comedy, coming of age, drama and tagged 1985, 2013, allison, andrew, awesome, brian, claire, connie, eighties, film, film freak, film review, filmfreak, freak, high school, john, judd, movie, music, nz, review, song, stereotypes, the breakfast club, the pleasure dome. Bookmark the permalink.

5 Responses to The Breakfast Club