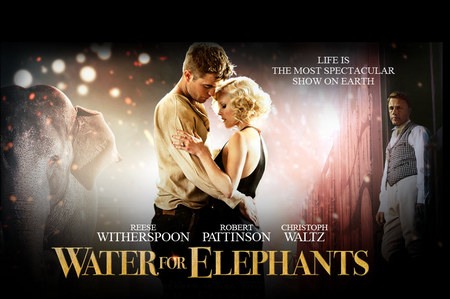 I bought this DVD as a bit of a whim. After stumbling across the trailer on YouTube I thought that the look of the whole film resembled the circus scenes in Big Fish. 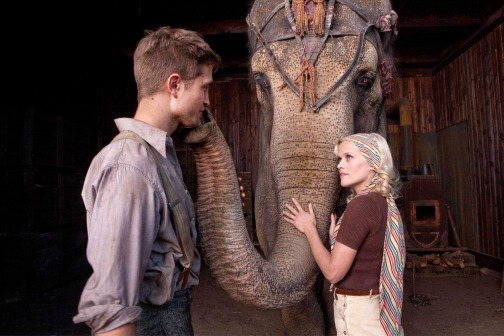 It is the story of the dark side of the circus during the early 1930s, with a forbidden love story between Jacob (Robert Pattinson) and Marlena (Reese Witherspoon) intertwined. Jacob runs away with the circus and poses as a certified vet to continue travelling with them, but discovers that there’s much more to performing that the magic the audience sees.

On the way, he experiences the control and under handed acts that go on in order to keep the circus from failing during the depression. Staff would go missing in the night if the boss and husband of Marlena, August (Christoph Waltz), was unable to pay.

The climax did have me holding my breath, but the over all story seemed somewhat watered down, with the lack of suspense throughout most of the heavier scenes.

Of course, my terrible habit is that I hype movies up before I’ve even seen them. I did think that Water For Elephants was going to be more dramatic and horrific, perhaps I would have been right if it was an R17 rating or something like that. But, it wasn’t a bad story by any stretch and it was an enjoyable romance drama – despite there being more romance that drama for my taste.

However, it was very well shot! The director, Francis Lawrence shows his talent for lighting in previous films including I Am Legend and has carried it through to Water For Elephants. I am excited to see how he portrays The Hunger Games sequels!

The acting was great for the most part! Christoph Waltz… Need I say more? He was amazing as usual, and one of the most compelling reasons to buy this movie, he was convincingly intense. Robert Pattinson was pretty decent too, possibly a little monotone..? Reese Witherspoon was AV-ER-AGE to say the least. Shallow acting.

A cool tale that explores the fantasy of running away with the circus.

I am a journalism graduate (2014) from New Zealand. Currently working in marketing, and writing fiction in my spare time. I love to write about movies on this blog when I can. I also do paid reviews and voiceovers via Fiverr (nzfilmfreak).
View all posts by NZ Film Freak →
This entry was posted in All Film Reviews, drama, Family Films, Girls' Night Movies, romance, Travel Movies and tagged 2011, 2013, awesome, christoph waltz, connie, drama, fantasy, film, film freak, film review, filmfreak, freak, movie, nz, reece witherspoon, reese witherspoon, review, robert pattinson, romance, water for elephants. Bookmark the permalink.

3 Responses to Water For Elephants