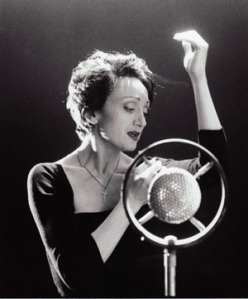 It is about a prostitute who is married to an accordionist who will be going to war soon and will not return to her alive.

Her man will never come back.
Goodbye to beautiful dreams.
Her life is done for.

I interpret her story as though she has to forget her emotions while she’s working, but as soon as she leaves and watches her husband play the Java, she becomes overwhelmed with emotion.

She wants to weep, it’s physical
All of her being is tense
Her breath suspended
The music has wrung her out

This song may be derived from similar life experiences. Piaf was abandoned by her parents and lived with her grandmother who owned a brothel. The prostitutes raised her and took care of her. By the age of 17 she had a child who then died at the age of two. Edith was involved in three near fatal car crashes, resulting in alcoholism that contributed to her liver cancer that took her life.

Such an unfortunate life, contrasted by her huge fame during the 1930s to 60s is tragic. But has most certainly been channelled in her beautifully emotional songs.

Obviously this song is sung in French, but that does not take any of the emotion away at all! Before I knew what she was singing about, I could hear the desperation and longing in her voice.

A beautiful song.
Jodie.
The final chorus from 2.40 is chilling!

I am a journalism graduate (2014) from New Zealand. Currently working in marketing, and writing fiction in my spare time. I love to write about movies on this blog when I can. I also do paid reviews and voiceovers via Fiverr (nzfilmfreak).
View all posts by NZ Film Freak →
This entry was posted in All Music Reviews and tagged 1940, 2013, awesome, connie, edith piaf, film freak, film review, filmfreak, freak, french, java, L'accordéoniste, La Fille de Joie Est Triste, music, nz, song, The Accordionist, translation. Bookmark the permalink.