This is the End

If you enjoyed The Hangover, Ted, 21 Jump Street and Superbad, then you will probably love this movie. 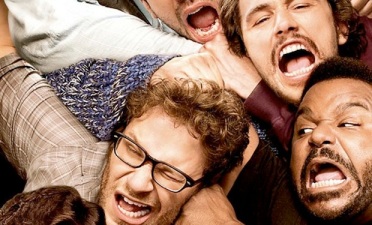 It is about the end of the world and how it affects the stars of Hollywood. In the film, their public image is mocked and they play to their weaknesses. Like, what do you reckon Michael Cera, Jonah Hill and Christopher Mintz-Plasse are like at a party? Yeah, they play to your assumptions which is quite hilarious.

As the world comes to an end, those who did not get saved and go to heaven have to stay on Earth to fight for their survival.

Pretty much every Hollywood star did not get accepted into heaven, including Emma Watson, Rihanna and Paul Rudd. So as hell opens up, a devil-like creature attempts to hunt them down.

It is a movie that makes fun of every actor’s reputation, with Jonah Hill being the funniest.

The main characters are James Franco, Jonah Hill, Seth Rogen, Jay Baruchel, Danny McBride and Craig Robinson who are stuck in James’ mansion until they figure out a way to get into heaven, rather than hell.

They find ways to survive and pass the time…

…which gets pretty ugly.

But there are some hilarious scenes with frequent film references, which I loved. The only film reference I felt was missing was if they sung  ‘Tribute” (Tenacious D in The Pick of Destiny) to the beast. That would have been funny…

My favourite scene was when they were bored and tried to make a sequel The Pineapple Express using total am-cam footage, and Jonah Hill dressed up as Woody Harrelson.

Also, the part where Jonah Hill gets possessed and an exorcism takes place. They used the script from The Exorcist, but Jonah’s sarcastic replies were pretty funny.

Their humour is an acquired taste so it’s not everybody’s cup of tea. Including mine. But I can certainly appreciate the good parts – which there are more of than I was expecting.

I am a journalism graduate (2014) from New Zealand. Currently working in marketing, and writing fiction in my spare time. I love to write about movies on this blog when I can. I also do paid reviews and voiceovers via Fiverr (nzfilmfreak).
View all posts by NZ Film Freak →
This entry was posted in All Film Reviews, comedy, Editor's Flops, Guys' Night In and tagged 2013, 21 jump street, apocolypse, backstreet boys, comedy, Craig Robinson, Danny McBride, emma watson, Exorcist, hangover, heaven, hell, James Franco, Jay Baruchel, jonah hill, michael cera, pineapple express, Rihanna, Seth Rogen, this is the end. Bookmark the permalink.

3 Responses to This is the End