Zhon: The Alien Interviews is a sci-fi comedy/drama web-series made in Southern Arizona by a group who self-funded the project.

The series is of a man, known as Zhon Jacob Jingle Heimer Schmidt, who claims to be an extra-terrestrial and has wandered Earth for thousands of years. He tells his story during an interview by the Secret Service.

I have watched the first episode, “Here’s Zhonny!” and I am quite keen to see more!

This genre is right up my alley, since I am into the comedic and dramatic Doctor Who (David Tennant) series. Tapping into an original and creative tangent of the classic sci-fi genre with very eccentric characters! Zhon: The Alien Interviews is certainly one out of the box! 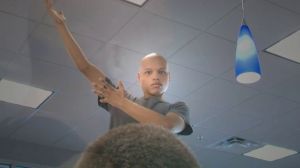 It is an off-beat journey with rather quirky characters. The script is well written with dialogue that is authentic. The use of silence is very well executed! Particularly in the first scene where the awkward silences make you laugh just because of the tension. In fact, the entire opening scene is probably my favourite. The Security Guard’s (Steve McKee) expressions were hilarious!

A lot of thought has clearly gone into the making of the web-series. The editing is well paced with a clear format typical of a television series. Although, I think the lighting and some of the audio could be evened out and given more attention to ensure a smoother transition between scenes.

Despite some of the acting being a little forced at times, the actors are well established in their roles. Their use of humour is fantastic! The funny lines of dialogue are fluently delivered – with some catchy lines!

“My name is Agent Killjoy”
“Your mother named you ‘Agent’!? Man! Talk about planning out a kid’s future!”

The main character, Zhon, is played by Robert Linden. The confidence of the character who has clearly experienced life in many places and eras shines through to create a believable and well-rounded protagonist.

The predominant member of the US Secret Service is David Killjoy, who is played by Eric Schumacher, who stands out for me. I can totally see some Matrix ‘Mr. Smith’ going on! Which seems rather appropriate. His facials and calm deliveries are awesome. He’s probably my favourite character because of his awkwardness, seriousness and desperate-looking professionalism.

I think the best decision this team of filmmakers made was staying away from the stereotypes of aliens, and keeping it upbeat.

When making projects on a budget, I’ve seen some genres become drastically unbelievable. However, this strong and entertaining web-series has certainly over-come that, and is sure to become popular for anybody who loves sci-fi, or has a passion for inspiring independent work.

After watching an episode and reading about what an epic project this web-series was for the cast and crew, you can totally appreciate what a grand challenge this was. The final product is exceptionally well produced, and is something everybody involved should be very proud of completing. Dedication much!

Zhon: The Alien Interviews is a fun and exciting web-series with a very interesting storyline. The idea of an alien being interviewed about his life, with flash backs to illustrate, is an effective idea. There’s nothing quite as intriguing as a character telling their story!

Expect to become a Zhonster!

Book me to review your film or series here

I am a journalism graduate (2014) from New Zealand. Currently working in marketing, and writing fiction in my spare time. I love to write about movies on this blog when I can. I also do paid reviews and voiceovers via Fiverr (nzfilmfreak).
View all posts by NZ Film Freak →
This entry was posted in TV Episode Reviews and tagged 2012, arizona, comedy, drama, extra-terrestrial, sci-fi, the alien interviews, web-series, zhon. Bookmark the permalink.