This movie is out of this world!
Ha.
I saw Gravity 3D and it was spectacular. The director, Alfonso Cuarón, said movies should be a visual experience – a lot of dialogue isn’t necessary to tell the story – and he certainly did that well.

Claustrophobia, agoraphobia, isolation, suffocation and death. This is a terrifying movie, playing on our natural fears. It is a very ‘human’ film – it goes back to basics – which is extremely effective in such an alien environment.

I’m not sure how to describe the epicness of the visuals… It is inviolable. Simply spectacular. The shot of the Northern Lights from outer space, and of the sun emerging from behind Earth… Wow.

Ryan (Sandra Bullock) and Matt (George Clooney) were absolutely incredible. I am a huge fan of George Clooney anyway, who played a chatty and upbeat character. But I was pleasantly surprised with Sandra Bullock! She convincingly played a strong protagonist.

All the dialogue used makes a huge impact. There is literally no unnecessary dialogue. The spoken word is almost used as a parallel storyline; Ryan’s back story links to her current traumas.

The audio is so detailed and layered. The use of silence is powerful and serene. Ryan’s  heartbeat can often be heard in the background. The point-of-view shots include the dampened sounds of collision as though heard from inside the astronaut suit.

Speaking of audio, the soundtrack is incredibly moving – especially in the final scene! RANDOM FACT: Steven Price, who composed for Gravity, also composed for The World’s End. 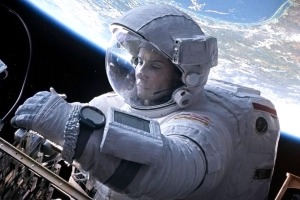 tructurally, the story keeps you hooked. The count down before the next debris shower from the destroyed satellite near-by, and the suspense as the oxygen depletes… You literally find yourself holding your breath.

The loneliness, desperation, mourning, horror and serenity creates a hugely emotional journey. The point-of-view shots, as mentioned before, just gets you closer to the action.

All my favourite movies are character-orientated and emotional. Juno, Young Adult, About A Boy, Little Miss Sunshine, The Perks of Being A Wallflower.. I could go on! But imagine that character development in a terrifying thriller with a totally original environment.

Intense, stunning and creative. It is definitely worth seeing in 3D.

The trailer gives away nothing. The storyline is barely touched upon – you’re in for a treat!
I just got chills. Again.

I am a journalism graduate (2014) from New Zealand. Currently working in marketing, and writing fiction in my spare time. I love to write about movies on this blog when I can. I also do paid reviews and voiceovers via Fiverr (nzfilmfreak).
View all posts by NZ Film Freak →
This entry was posted in All Film Reviews, Date Night Movies, Editor's Pick, sci-fi and tagged 2013, character, connie, george clooney, gravity, nzfilmfreak, sandra bullock, space, thriller. Bookmark the permalink.