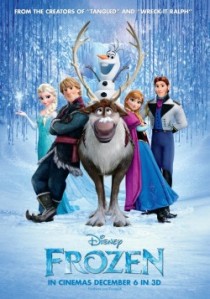 I’m not a huge fan of the cheese-covered conservative Disney films in general. I avoided watching Frozen until just last week, but I have to say, I was pleasantly surprised.

This was a modern story where the main characters are not searching for true love for once. In fact, it was based around friendship and family.

trailer includes all of the cheese, targeting the younger audience with the shallow humour.

However, the humour in the movie is actually quite funny and target toward an older audience too.

I love how the characters are flawed. The princesses are far more relatable because they’re not perfect. In fact the Queen’s sister, Anna (pronounced Ana), is weird, quirky, funny and spontaneous who makes mistakes. 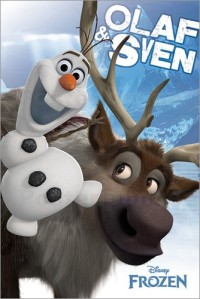 The characters look shallow in the advertising of Frozen, but they’re actually all lovable in the movie. From Olaf the snowman to Sven the reindeer.

I love the setting – Scandinavia is a beautiful choice, and a step back from traditional Disney settings where snow and blizzards are traditionally used as a backdrop to the tragic scenes.

The down-side were the accents… Only the main characters had American accents, which clashed with the Scandinavian community…

Disney has still kept with the baby-faced women with figure-hugging dresses. I think this is still a bit old fashioned. Why not have normal-sized eyes with a proportional body?

I always get annoyed with ALL the female characters having long hair in Disney films. I’m glad to see the likes of Tangled embracing short hair, but I think there should be a balance…

But the soundtrack was incredible with extremely catchy songs you won’t be able to get out of your head for weeks… Not even exaggerating. Kristen Bell does a magnificent job of voicing Anna – I had no idea she could sing!

Overall it was a fun film and worth a watch. A genuinely enjoyable film for the family.

I am a journalism graduate (2014) from New Zealand. Currently working in marketing, and writing fiction in my spare time. I love to write about movies on this blog when I can. I also do paid reviews and voiceovers via Fiverr (nzfilmfreak).
View all posts by NZ Film Freak →
This entry was posted in All Film Reviews, Family Films and tagged 2013, ana, animation, anna, disney, elsa, film, freak, frozen, jodie, Kristen Bell, let it go, movie, olaf, snow, sven. Bookmark the permalink.