This is the fourth Transformers movie. This has gone on for too long.

It’s about government agencies coming after people who have found a Transformer. Transformers are no longer welcome as they are deemed ‘alien’. 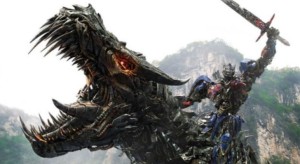 I’m not a Transformers fan, but I can appreciate that cars becoming giant robots are cool.

However, the fighting was endless and exhausting, and acting was hopeless. It was a pointless and boring two hours and 45 minutes.

Assuming that Transformer fans enjoy these movies because of the graphics when the machines physically transform will be sorely disappointed. The entire premise of this fourth film is based around how the man-made Transformers don’t “transform” at all, and when the original machines are about to transform, the camera  pans away!

The product placement was blatant and outright ridiculous. Stanley Tucci is amazing, but conveniently drank a Chinese soy-based beverage toward the camera, with the branding beautifully framed and presented. It was pathetic.

If you’re okay with being belittled and being nothing more than a captive audience to sell Victoria’s Secret, Bud Light and energy drinks to, be my guest. But it is certainly an exhaustingly long film with a stupid storyline. Although, to be fair, I zoned out by the time the characters made it to China…

Transformers: Age of Extinction is a three hour ad break.

Oh so boring. Please, no more.

Two points were given because:
1. The dinosaur transformer things were pretty cool
2. Stanley Tucci

I am a journalism graduate (2014) from New Zealand. Currently working in marketing, and writing fiction in my spare time. I love to write about movies on this blog when I can. I also do paid reviews and voiceovers via Fiverr (nzfilmfreak).
View all posts by NZ Film Freak →
This entry was posted in action, All Film Reviews, Guys' Night In and tagged 2014, 4, age of extinction, china, transformers. Bookmark the permalink.

4 Responses to Transformers: Age of Extinction