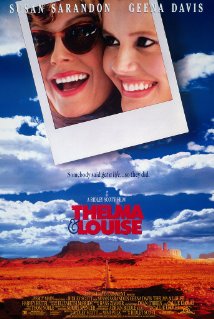 I can’t believe I haven’t written about Thelma & Louise. This is my favourite movie of all time.

Geena Davis and Susan Sarandon were stupendous. Absolutely the perfect actresses to portray Thelma, the naive housewife, and Louise, the hardened but streetwise woman. 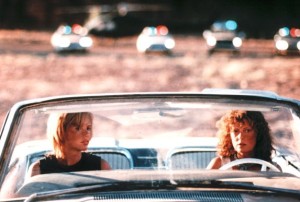 If you haven’t seen this movie, it’s about two women who needed a break from their respective husband and boyfriend, and took a weekend away. Except, after getting caught up in a major kerfuffle, the women find themselves on the run from the law. They have never experienced such freedom, and use the lack of rules to their advantage by going on a crime spree. But, they do take moral responsibility for everything they do. They are able to fully explore who they are without the moulding of a man in their lives.

I love films about the characters. Like The Jane Austen Book Club, where you can see a piece of yourself in every character, and the clear development of them.

I’m drawn to this honest movie because Thelma and Louise break through their fears. They learn hard lessons, but ultimately become exactly who they want to be. Reminding me of the The Secret Life of Walter Mitty where he takes off to Iceland and discovers how freedom can shape you. Perhaps part of the same runaway genre.

It’s a road trip film with gorgeous scenery and music that perfectly fits. It’s based in the South as the pair are heading for Mexico. However, the film was actually shot in rural California and Utah – even the Grand Canyon scenes.

On the road in their blue/green T-Bird convertible, the women evolve physically too. Thelma Dickinson, the housewife, starts out with flowing dresses and long hair. By the end, her hair is tied back, she’s wearing a trucker’s black shirt with sleeves rolled up and jeans. Louise Sawyer, the surly, controlling character, starts out wearing an

outfit that is ‘just so’. By the end, she’s wearing a loose tank top and jeans.

They strip off their make up and steal men’s hats and clothing. The denim jacket from Brad Pitt’s character is altered by the women by making it sleeveless and using parts of it for neck ties and such. Almost as a way to tear the layers of control and weakness away, and rebuild their characters in the ways they want.

I also see this as their way of dismembering authority. In the same way that a hunter kills fierce animals for its fur, and taking it as a trophy.

The men in this movie play important parts but take a back seat to the development of Thelma and Louise. Sometimes literally. I read that some found the movie to be ‘man-hating’. But I think it’s just unusual to see two strong women convincingly portrayed in films.

Thieving men (Brad Pitt), rude truck drivers, controlling husbands and flaky boyfriends, Thelma and Louise find ways to rebel, and use the men to their advantage. They stop relying on men for protection, and start standing on their own two feet.

I’m so inspired by these characters. They are so independent and fearless, yet they are so carefree and fun despite their situation.

I think everyone can see the naive, open and scared ‘Thelma’ in themselves, and the logical, unwavering and powerful ‘Louise’. Which is why these characters are so relatable and ‘real’. 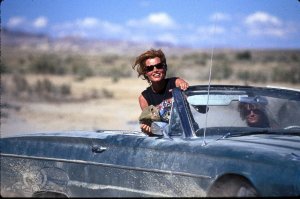 Thelma & Louise is a profound, freeing and exciting journey. I love this film so much because the women are doing what every woman wants to feel capable of doing. Being in control of their future, going wherever they want, and nobody is getting in their way! Everything is on their terms right to the end.

I’m going to steal what Susan Sarandon said in an interview; it is a comedy and a tragedy with a surprise ending, and political significance.

This is a pretty long review so I’ll stop here. Believe me, I could make it longer!

This is a timeless film that makes my imagination run wild. It’s adventurous and always makes me feel happy and inspired at the end of every watch. However, I don’t want to give it full marks because it is for quite a narrow audience.

I am a journalism graduate (2014) from New Zealand. Currently working in marketing, and writing fiction in my spare time. I love to write about movies on this blog when I can. I also do paid reviews and voiceovers via Fiverr (nzfilmfreak).
View all posts by NZ Film Freak →
This entry was posted in All Film Reviews, Girls' Night Movies, Travel Movies and tagged 1991, brad pitt, comedy, geena davis, jodie, louise, review, ridley scott, susan sarandon, thelma, thelma & louise, tragedy. Bookmark the permalink.