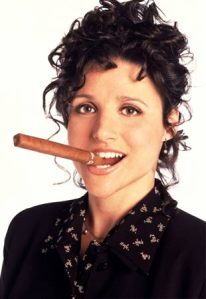 Seinfeld is my favourite TV series because it is based on nothing. It’s just four people going about their lives, focussing on the odd things that happen from day to day. From these occurrences comes addictive catch-phrases that I’m sure you’ve heard before. “Serenity now!” “Festivus for the rest of us!”

Please refer to this extensive list for the full collection of Seinfeld phrases.

Elaine (Julia Louis-Dreyfus) is my favourite character because she’s one of the guys, without compromising her femininity. She’s independent, a successful writer with a thriving social life.

Yes, she’s promiscuous, but she always ends up with the upper-hand in every relationship. I don’t think there’s an episode where she is genuinely upset when a relationship ends.

I love her because she is so negative about everyone and everything, yet she still manages to make hilarious, witty remarks about every situation without making herself appear egotistical.

Julia Louis-Dreyfus plays her SO well. I can’t imagine anyone else doing a better job. She’s versitile and does comedy so well.

Have you seen some of the weird faces she pulls? Or even Elaine’s dancing! Louis-Dreyfus is so talented, and so hilarious.

Also, her hair is spectacular.

I am a journalism graduate (2014) from New Zealand. Currently working in marketing, and writing fiction in my spare time. I love to write about movies on this blog when I can. I also do paid reviews and voiceovers via Fiverr (nzfilmfreak).
View all posts by NZ Film Freak →
This entry was posted in A Few of My Favourite Things, Extras and tagged 1990s, character, elaine benes, favourite, jerry, jodie, Julia Louis-Dreyfus, seinfeld. Bookmark the permalink.