Three years of blogging on NZ Film Freak. Not a bad achievement! 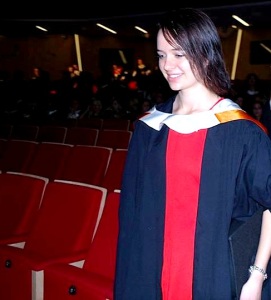 Jodie’s graduation: I got caught in the rain… Hence my hair looking the way it does.

I have completed my Bachelor of Communications degree, majoring in journalism, which has led me to amazing opportunities such as working for a community newspaper, and a legit film reviewing site called Flicks.

I have rediscovered my love for photography, and creative writing – not sure if you’ve read my poems… They get a wee bit crazy pretty quickly.

I’ve also found a previously unexplored knack of mine doing voice overs. My voice is being played on podcasts and indie radio stations all around the world! Very exciting. Most of them via Fiverr.

Since graduating, the question I have been asked like a broken record is:

And fair enough; what am I going to do with my life?

(Perhaps university doesn’t prepare you for answering this giant question because they want you to feel so overwhelmed with the real world that you end up turning around and enrolling in an expensive post-grad course.)

I do take inspiration from movies when having to make a big decision. For example, after watching Julie & Julia I decided to create this very blog!

In the case of post-uni life, I seriously considered doing what the main character did in Into the Wild. But that was before I watched the ending.

I wasn’t smart enough in uni for my life to turn out like Good Will Hunting. Nor was I grunge or cool enough to be Becca in Pitch Perfect.

However, I shall find my path as a grown-up!

I’m going to continue Film Freaking, and I hope to work in the exciting world of radio! Perhaps reviewing films, or writing on websites or talking about music or…

I love the idea of working in radio, (not just because the guys on The Boat that Rocked looked like they had so much fun), but also because I’ve become a bit more familiar with it since doing voice overs.

Also, I’ve been listening to a lot of The Ricky Gervais Show, which features Karl Pilkington. Working around great, charismatic people seems like a grand thing to be a part of.

Enough of me, though!

2014 has brought us a lot of animated films, and a few more epics like last year! But ultimately, it’s a mixed bag.

I haven’t reviewed an awful lot this year, so I do apologise! But I have to say, I think last year’s assortment was better.

8/10
The Way, Way Back
Nightcrawler
Her

A Show About Nothing!
2/10
Transformers: Age of Extinction

Expect to see more posts on my blog, anyway. I love getting good feedback, so please vote on the polls, comment on my posts and like my Facebook page. It means a lot!

I am a journalism graduate (2014) from New Zealand. Currently working in marketing, and writing fiction in my spare time. I love to write about movies on this blog when I can. I also do paid reviews and voiceovers via Fiverr (nzfilmfreak).
View all posts by NZ Film Freak →
This entry was posted in Extras and tagged 2014, 2015, good bye, new year. Bookmark the permalink.