I am so slow to the party.

This song was on The Hunger Games: Catching Fire soundtrack, and boy is it powerful.

I think the song can speak for itself, but it’s a chilling story of the singer’s two emotional versions of herself. Each side wrestles to become dominant.

The music video is equally as powerful – but has been rather controversial. 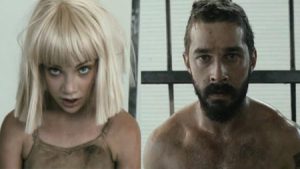 This concept of dominance is portrayed by 28-year-old actor Shia LaBeouf and 12-year-old Maddie Ziegler through interpretive dance. It is directed by Sia and Daniel Askill, and choreographed by Ryan Heffington.

Wearing nude-coloured clothing, they dance inside a giant cage, that I assume represents Sia’s head. Ziegler being the protective, flexible side, LaBeouf portraying the aggressive and restricted side. 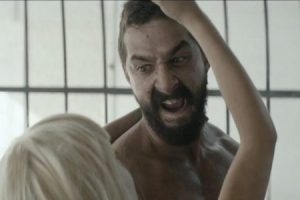 (Toward the end of the video, Ziegler softly hits LaBeouf on his forehead. Each time she does so he changes his expression to show the emotions he represents: scared (he’s holding his breath – claustrophobia?), sarcastic, angry and depressed.

Some (in the twittersphere) are saying the video is referring to paedophilia, or could offend victims because a young girl is dancing with an older man.

It is a video that looks primal and raw, but I don’t really think it’s sexual at all.

Personally, I didn’t realise how young the girl was until I read about it. However, it hasn’t changed my view on the video. I find it creative and expressive. But I suppose you can read into anything if you have an angle in mind.

I think the video shows an incredible amount of talent and power to match an energetic song.

Sia has since tweeted an apology to those who were offended.

All I can say is Maddie and Shia are two of the only actors I felt could play these two warring ‘Sia’ self states. I [apologise] to those who feel triggered by ‘Elastic Heart’. My intention was to create some emotional content, not to upset anybody.

A behind the scenes video of Elastic Heart has been released.

I am a journalism graduate (2014) from New Zealand. Currently working in marketing, and writing fiction in my spare time. I love to write about movies on this blog when I can. I also do paid reviews and voiceovers via Fiverr (nzfilmfreak).
View all posts by NZ Film Freak →
This entry was posted in All Music Reviews and tagged 12-year-old, cage, controversial, dance, Daniel Askill, film, hart, jodie, Maddie Ziegler, music, outrage, paedophilia, review, Ryan Heffington, Shia LaBeouf, Sia, song, video. Bookmark the permalink.