Based on a true story, Cheryl Strayed (Reese Witherspoon) battles the ghosts of her past: heroin addiction, divorce, the death of her mother and the abandonment of her father. As a way to start fresh, she goes on a 1000-mile journey along the Pacific Crest Trail. 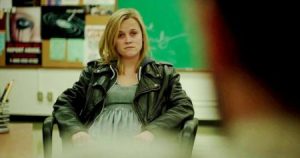 To be frank, the flashbacks made me feel really uncomfortable. But… I guess the world of heroin addicts shouldn’t exactly be attractive.

A classic ‘runaway movie‘, although I’m not entirely sure if this is actually a sub-genre. Nevertheless, Wild fits into this category along with Into the Wild, Thelma and Louise.

Find out more about the runaway genre here!

In fact, if you enjoyed Into the Wild (also a biographic), then you’re likely to enjoy Wild. It’s basically the same story but from the perspective of a woman, with different life problems.

I honestly had little doubt in Reese Witherspoon. I knew she would play this complicated character well. I’ve really enjoyed her more serious roles ever since Walk the Line.

When I walked out of the cinema, I needed time to process. I really felt moved by this film, not only because I love the ‘runaway genre’, but because the film makers portrayed Strayed’s emotions so convincingly that I started to take her problems on board.

I’d like to point out that the screenplay was written by Nick Hornby, who wrote About A Boy. Whatta guy!

Wow, almost forgot to mention the soundtrack! The songs include a perfectly fitting Portishead song (Glory Box) that plays during flash-backs to Strayed’s lowest of times as an addict.

Other amazing artists on the soundtrack include Simon & Garfunkel, an R.E.M cover by First Aid Kit, Wings, Leonard Cohen, Bruce Springsteen… It goes on.

I think the best movies make you laugh, cry and leave you with something to ponder. Wild certainly does. Some parts are hard to watch (not quite on par with the dreaded Requiem for a Dream though), but for the most part, I enjoyed it.