In the Mood for Love

Because this movie isn’t in English, I’m just going to do a fat dissection of the visuals… Enjoy!

A story about two married couples who move into an apartment next door from one another. One couple is Chow Mo-wan, a journalist, and his wife. The other is Su Li-zhen, a secretary, and her husband.

Chow and Su both have a spouse who works over-time often, leaving them alone in their rooms most nights. However, their absence slowly brings Chow and Su together, and they speculate over unfaithfulness in their respective spouses. 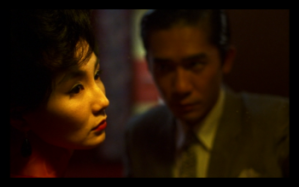 Based in Hong-Kong during the 1960s, their closeness is frowned upon so, even though only friends, Su and Chow begin a more secretive relationship.

I love how the director portrays the story visually. The spouses of Chow and Su are never seen, their faces are forever unrecognisable, with only their voices heard. This reinforces their lack of identity within their respective marriages, and their lack of presence.

I’m not familiar with Asian film, but it is a fantastically shot movie, although veeeery slow in pace.

The use of slow-motion is used often, emphasising Chan and Su waiting for their spouses to come home every night. A great scene is when the two begin to work out that both of their spouses are having an affair with each other. The camera movements get faster and closer while sitting in a cafe, and then Chan and Su leave together in slow motion, emphasising their shared heartbreak and unity.

The slow motion scenes occur regularly to mark chapters, married with the same piece of suspicious/melancholy music. Although repetitive, it works well to portray the characters growing and moving closer.

Food is a very important symbol in the film. Chan’s and Su’s first meal together parallels them coming to terms with their spouses infidelity. Where they used to get take-out from the same place and eat alone, this first meal is an important milestone.

Chan orders for Su, picking out a dish his wife likes, and Su picks out a dish for Chan that her husband would usually eat. They frequently ‘play’ each other’s spouses, almost as though to keep their growing friendship a make-believe, so as not to take responsibility.

Food is something to share and something that expresses themselves. Where Chan enjoys noodles and sesame soup, his cheating wife prefers steak with hot mustard, for example.

This is a story about coincidence, and people who have the courage to pursue chance encounters and near-missed opportunities. Chan and Su are both frequently referred to as being too polite. Their almost cowardliness natures lead to them being perpetually unhappy in their already broken marriages, too scared to make the first move.

A film that perfectly illustrates the tug-of-war between, ‘what’s meant to be, will be’ and ‘make it what you want’. A right to be happy and honest, versus secrets and unhappiness.

That turned out to be a bit longer than expected! It’s worth a watch, the full movie can be found on Youtube at the moment.

In the same way that English and American films are completely different in tone and humour, even if in the same genre, this Chinese film is different again. I’m having difficulty rating it as I’m not familiar with the culture, humour or film production, with nothing for comparison. 6/10 perhaps?

I am a journalism graduate (2014) from New Zealand. Currently working in marketing, and writing fiction in my spare time. I love to write about movies on this blog when I can. I also do paid reviews and voiceovers via Fiverr (nzfilmfreak).
View all posts by NZ Film Freak →
This entry was posted in All Film Reviews and tagged chinese, film, filmfreak, fiverr, in the mood for love, jodie, review, romance, Wong Kar-Wai. Bookmark the permalink.

3 Responses to In the Mood for Love