“You can’t handle the truth!”

Well. Now I know where this famous quote actually comes from. I’ve heard it being referenced in Seinfeld (and probably countless other shows), and hadn’t the slightest clue it was from a good movie – not  some Terminator, mindless action film that for some reason I always assumed it would be from.

Man, this movie is my favourite at the moment. I’m assuming I was the only person on the planet who hadn’t seen this film, but if you need a refresher of the plot without any of the court or Marine jargon…

Kaffee, (Tom Cruise), Galloway (Demi Moore) and Weinberg (Kevin Pollak) are defending two Marines – Dawson and Downey – who are accused of killing another Marine named Santiago, via a “Code Red”. Which is a “violent extrajudicial punishment”, according to Wikipedia. But it’s fundamentally where people of higher ranks turn their heads while Marines beat the crap out of each other for being late, or running slowly, or just being a dick in general. 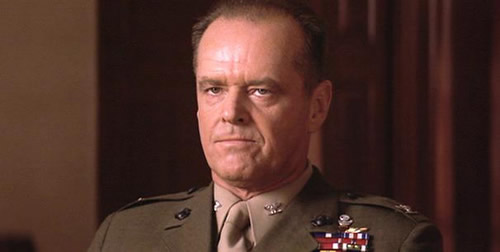 Cruise’s character is over-confident, and he asks super awesome questions to people ranked way above him. But he has to be careful when he begins questioning Jack Nicholson’s character, because if he can’t get him to admit that he knew about the Code Red, then Tom Cruise’s character will be down the pan for accusing a Colonel… Basically.

Oh! And, Captain Jack Ross (Kevin Bacon) – not to be confused with popular Disney pirate, Captain Jack Sparrow – is the lawyer person on the other side, trying to get Dawson and Downey out of the Marines for supposedly murdering Santiago.

Anyway! Explaining any court-based story sounds boring on paper, but super cool in the movies.

I love how Demi Moore’s character isn’t a typical downtrodden, infatuated female. She’s as strong, competent and as funny as the men, and does well in her job without being the damsel in distress, or totally boring.

Oh! And how she asks Tom Cruise’s character on a date, because she’s a strong, independent woman who don’t need no man to ask her! *Snaps fingers in a sassy fashion*. But it doesn’t get lovey-dovey at all – such a breath of fresh air.

Galloway: But my feeling is that if this case is handled in the same fast-food, slick-ass ‘ Persian Bazaar manner with which you seem to handle everything else, something’s gonna get missed. And I wouldn’t be doing my job if I allowed Dawson and Downey to spend any more time in prison than absolutely necessary, because their attorney had pre-determined the path of least resistance.

Although, through all three viewings of this film within a week, I could not figure out Demi Moore’s hair… Is it short? Is it long and tied back? Is it actually Travolta’s hair from Grease..? It broke my brain a little bit. Looks pretty cool, nevertheless.

I’m typically not a fan of Tom Cruise, but he is comical, intense, and plays the part of the spoiled, cocky, lawyer remarkably well. He’s so sassy, with smart-mouthed come-backs.

Kaffee: Oh, hah, I’m sorry, I keep forgetting. You were sick the day they taught law at law school.

The only thing that dates this film is the repeated music that is quite obviously from the late 80s/early 90s. Apart from that, I think it’s held its own very well indeed. It’s just as entertaining now, as I’m sure it was back in ’92.

I almost forgot – Kiefer Sutherland is in it! He’s so intense. Everyone is! I definitely could not survive in the Marines… But, doesn’t Sutherland just look SWELL. *Swoon* I still prefer him in The Lost Boys though…

I love courtroom dramas. Just when you think Cruise’s character is out, he finds a loophole. It’s like Sherlock Holmes meets Judge Judy!

“It doesn’t matter what I believe. It only matters what I can prove!”

Kaffee: I know what you’re going to say – You don’t have to. We’ve had our differences. I said some things I didn’t mean; you said some things you didn’t mean, but you’re happy I stuck with the case. And if you’ve gained a certain respect for me over the last three weeks… well, of course, I’m happy about that. But we don’t have to make a whole big deal outta that – you like me? I won’t make you say it.

Galloway: I was just going to tell you to wear matching socks tomorrow.

I am a journalism graduate (2014) from New Zealand. Currently working in marketing, and writing fiction in my spare time. I love to write about movies on this blog when I can. I also do paid reviews and voiceovers via Fiverr (nzfilmfreak).
View all posts by NZ Film Freak →
This entry was posted in All Film Reviews, Date Night Movies, drama, Editor's Pick and tagged 1992, a few good men, demi moore, film, jack nicholson, kevin bacon, kiefer sutherland, marines, movie, review, tom cruise. Bookmark the permalink.

7 Responses to A Few Good Men