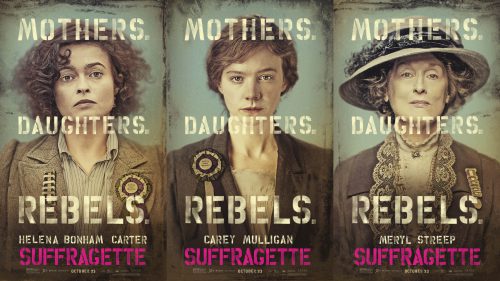 I have watched every teaser, trailer, clip and interview to do with this movie. I am so excited to see it.

Suffragette is based on a group of British women in the late 19th century and early 20th century who demanded gender equality. Their political action shook the system, which goes to show what a threat they were to the societal hierarchy.

We break windows, we burn things because war is the only language men listen to… We’re half the human race, you can’t stop us all.
We will win. – Carey Mulligan’s character

96% of Hollywood directors are men, 74% of leading roles go to men. But in Suffragette the main cast includes Carey Mulligan, Helena Bonham Carter, Anne-Marie Duff, Meryl Streep… Not to mention the writers and director – all women. How refreshing – they practice what they preach.

Suffragette is more than a film, though. It’s a story about women, told by women. And, it’s  made such an impact because films mirror our society – and we can see ourselves in this story. 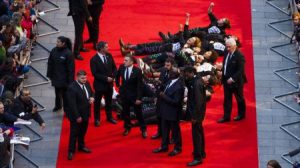 We’ve reacted to it – even on the red carpet at the film’s premiere, there were demonstrations fully welcomed by the cast. And now: I’m writing about it. Just from seeing the trailer, it has inspired me.

Of course, this goes way beyond Hollywood. ‘Equal pay for equal work’ is something that is demanded in every occupation. Even more shocking is that it’s been an issue for a long time, with a giant leap made in the 60s documented in Made in Dagenham.

…we got to demand a level playing field and rates of pay which reflect the job you do, not whether you got a dick or not!

I’m no psychologist, sociologist, scientist or analyst, but it’s pretty sad that there is still so much inequality.  Nevertheless, I am stunned by what a huge impact a film can have on our perception of society. Incredible! 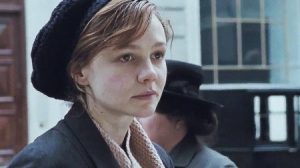 On a shallower note… I AM SO PSYCHED TO SEE CAREY MULLIGAN IN THIS ROLE. And I adore Meryl Streep. SO EXCITED. (But where is Emma Thompson and Emily Blunt..?)

Anyway, until New Zealand plays Suffragette on BOXING DAY (while everybody else gets it this month) adieu!

I am a journalism graduate (2014) from New Zealand. Currently working in marketing, and writing fiction in my spare time. I love to write about movies on this blog when I can. I also do paid reviews and voiceovers via Fiverr (nzfilmfreak).
View all posts by NZ Film Freak →
This entry was posted in A Few of My Favourite Things, Extras and tagged Anne-Marie Duff, Brendan Gleeson, Carey Mulligan, helena bonham-carter, meryl streep, Suffragette. Bookmark the permalink.

1 Response to Looking forward to: Suffragette