I am ashamed how close I came to watching Tina Fey’s new movie, Sisters, rather than seeing this touching drama. (I still reckon Tina Fey is a genius, though.)

After seeing the Brooklyn trailer I was prepared to see a slow-paced, sullen and potentially grim film. But this was not the case!

I walked out of the cinema feeling uplifted, positive and encouraged. I felt as though I’d been wrapped up in a big, fat duvet, sung a lullaby while sipping on hot cocoa inside by the fire during a blizzard… It gave me the warm and fuzzies, and made me feel happy. 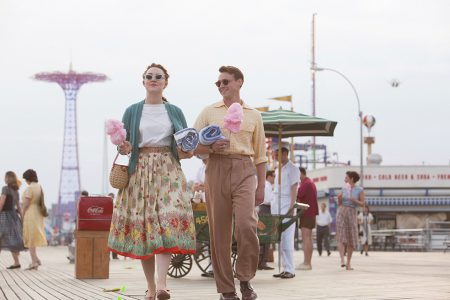 It’s about young Eilis Lacey (Saoirse Ronan) who is having a tough time growing up in Ireland, with not much in the way of a job, opportunities or a meaningful future.

Eilis’ sister sends her to Brooklyn to give her a chance at a better life, leaving her small family behind, devastated. However, she’s promptly set up with a job, warms to living in a loving boarding house, and meets a plucky Italian feller (Emory Cohen).

But tragedy strikes, and she must return to Ireland.

This is where she meets a charming Irishman (Domhnall Gleeson), and must choose between the life she has always hoped for in Ireland with her family, and the life she has made for herself back in Brooklyn.

Father Flood: Homesickness is like most sicknesses, it will pass. It will make you feel wretched, and then it will move on to someone else.

Based in the 1950s, Brooklyn is a bright, feel-good movie with beautiful dresses and make-up, as well as having an incredibly romantic storyline.

Mrs. Keogh: I’ll tell you this much: I am going to ask Father Flood to preach a sermon on the dangers of giddiness. I now see that giddiness is the eighth deadly sin. A giddy girl is every bit as evil as a slothful man, and the noise she makes is a lot worse. Now, enough.

Mrs. Keogh: [in response to someone saying ‘oh God’ to stockings at a store called Bartocci’s] I’ll thank you to keep His name out of a conversation about nylons, thank you very much. He might be everywhere, but He’s not in Bartocci’s on sale day.

A heart-wrenching, relatable and deeply emotional story. I loved it. I laughed, I sobbed (wait for the part where the homeless man sings – I got chills), I was totally engaged from beginning to end.

If I must be so picky, though… The second half of the movie – where she returns to Ireland – lacks the intensity of the first half. It didn’t so much sag, but it did slow in pace a tad, making it a little unclear how conflicted she really is about whether she should stay or leave.

Nevertheless, this is a movie I wish I could watch again and again, to fully immerse myself in the 1950s culture, beautiful lighting and cinematography… And drool every time Tony the Italian man spoke in a dreamy Brooklyn accent.

It tugs on the heart-strings, for sure.

I am a journalism graduate (2014) from New Zealand. Currently working in marketing, and writing fiction in my spare time. I love to write about movies on this blog when I can. I also do paid reviews and voiceovers via Fiverr (nzfilmfreak).
View all posts by NZ Film Freak →
This entry was posted in All Film Reviews, coming of age, drama, Editor's Pick, Girls' Night Movies, Travel Movies and tagged brooklyn, Domhnall Gleeson Jim Broadbent, drama, Eilis Lacey, Emory Cohen, ireland, john crowley, julie walters, Nick Hornby, Saoirse Ronan. Bookmark the permalink.