David Brent: Life of the Road 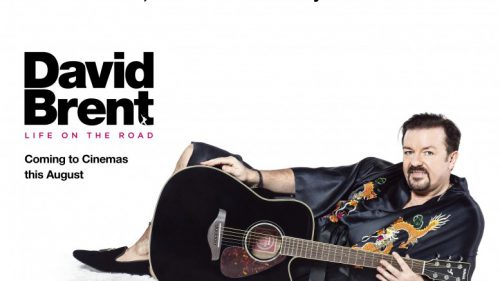 Looking forward to having a big belly laugh, my boyfriend was quick to remind me about his older films. Of which only one – Cemetery Junction – I enjoyed.

He was right, and my initial excitement for David Brent: Life on the Road suddenly took a dive.

Thinking about it, Ricky Gervais has a knack for TV series, but in his film career – in my opinion – he has always been a one-trick-pony.

David Brent is now working in a different office, but takes unpaid holiday to do a local ‘tour’ with his band.

After the first five-minutes of becoming reacquainted with the cocky and cringe-worthy character of David Brent, the repetitive jokes were drilled in over and over. This comedy became boring quite rapidly.

With the amount of static tripod shots used, even the documentary-style quickly slipped away. The interviews with the characters basically told the audience what we already knew about David Brent. We know he’s hopeless and harmless, funny, and ignorant rather than arrogant.

We know how to feel about the character – stop telling us.

The cringe-worthiness became tiring over the one and a half hours. In fact, I ended up giving up on the protagonist rather than being behind him.

I did enjoy some of the lyrics in his songs. A previously unexploited skill of Ricky Gervais’, with a taster of his lyrics shown in the David Bowie episode of Extras.

I missed the banter from the characters in The Office. Instead, the office David Brent works in now were simply split into bullies and heroes, which wasn’t as relatable as in the TV series.

The ‘c-word’ was thrown in for good measure – typical of Gervais films.

If it wasn’t for my boyfriend’s reminder before entering the cinema, I would have been far more disappointed than I was. Instead, this movie has simply reinforced Ricky Gervais’ strengths and weaknesses.

I hope he can team up with Stephen Merchant again to make another super successful TV show. (Like Extras, which I have always found gut-wrenchingly funny.)

I am a journalism graduate (2014) from New Zealand. Currently working in marketing, and writing fiction in my spare time. I love to write about movies on this blog when I can. I also do paid reviews and voiceovers via Fiverr (nzfilmfreak).
View all posts by NZ Film Freak →
This entry was posted in All Film Reviews, comedy, Editor's Flops, Guys' Night In and tagged comedy, david brent, fiolm, jodie, life on the road, review, ricky gervais. Bookmark the permalink.

1 Response to David Brent: Life of the Road