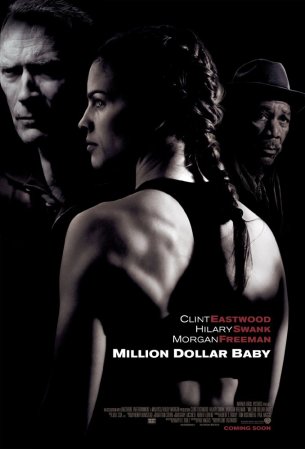 I have heard references to this movie within multiple movies (Pitch Perfect in particular), but had never bothered watching it. From the outside, I figured it’s just a violent, shallow and dark tale of a female boxer. So I never showed much interest before I was leant the movie, so I thought I should give it a go.

Nevertheless, after watching Million Dollar Baby, I realised that my assumption was correct. It is certainly dark and violent.

However, the story is far more engaging and more emotionally satisfying than I thought it would be. I had assumed it would be like a Bourne action film, but instead of the endless bullets and guns and shooting, it would endless hits, punches and toothless, bloody grins. Thankfully this film held more substance though.

I should have known that if Morgan Freeman and Clint Eastwood are in it, then it would be a decent film. 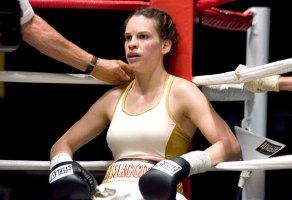 Despite Maggie’s (Hilary Swank) jarring Southern accent, I enjoyed watching a female protagonist being as successful as a typical male protagonist would be. It was also refreshing to see a strong woman retain her femininity within the male-dominated sport of boxing.

It was gruesome at times, particularly the part where Maggie gets her nose broken. (Very realistic though.) Then it’s deeply philosophical at other times. It’s a great underdog movie.

That is until the ending…

Her final round was hard-hitting (no pun intended). It only took one second for a dirty swing from a dodgy competitor to result in such permanent damage. I found this scene quite moving actually; how in a split second, a decision can massively change a person’s fate.

Disappointingly, the conclusion is far from what I hoped. Was it really necessary to build our main character up that high, only to let her fall so devastatingly? Bit grim. Bit depressing.

I am a journalism graduate (2014) from New Zealand. Currently working in marketing, and writing fiction in my spare time. I love to write about movies on this blog when I can. I also do paid reviews and voiceovers via Fiverr (nzfilmfreak).
View all posts by NZ Film Freak →
This entry was posted in All Film Reviews, drama and tagged boxing, clint eastwood, film, hilary swank, million dollar baby, morgan freeman, review. Bookmark the permalink.