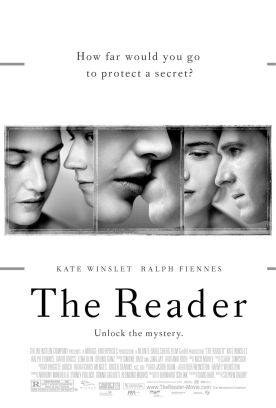 I’ve been thinking about this movie for days.

A gripping tale in post-war Germany, about a woman name Hanna Schmitz (Kate Winslet) who has a summer affair with a teenage boy named Michael Berg (David Kross). Their romance centres around the novels Berg is reading at school, which Schmitz asks him to read aloud to her everyday. Their passionate relationship soon ends when Schmitz mysteriously disappears, heartbroken Berg is hugely impacted by the relationship and its abrupt end.

A few years later, Berg is a law student and is sitting in on a Nazi war crime trial in court where he is stunned to see Schmitz. She is accused of being wholly responsible for mass murder during the war, but Berg knows a certain bit of information that could reduce her sentence significantly. Should he reveal it to the courts to save a former lover? Or does she not deserve his help?

The Reader is about the guilt innocent people feel for the bad things loved ones have done. The guilt of loving someone who is guilty of major crimes. The betrayal and shame felt of a loved one’s poor decisions.

This was inspired by the writer’s experience of post-war Germany where his beloved and respected professors revealed the text books they had written during Hitler’s reign, and how he felt betrayed by the people he thought were perfect.

The first half of the film made me feel uncomfortable because the love affair is between a woman who is twice the age of the boy. The nudity and intimate scenes is typical of European movies – who find no shame in the human body, or with sex. Whereas, English and American films are far less comfortable with nudity and increasingly at ease with violence, blood and gore. A strange cultural divide that’s influenced their films.

The second half of the film, however, is absolutely gripping. The war-crime trial in the courtroom, and the tangible tension between the main characters; the emotional extremes of innocence and guilt, love and regret. There is such a build-up to this point that I really felt I was looking through the eyes of Michael Berg.

The writers did an amazing job of never telling the audience how to feel. Because it’s based in post-Nazi Germany, they intended the story to steer clear of blame, justice and forgiveness in respect for the survivors and victims.

Michael Berg doesn’t have a monologue, but you can feel the responsibility and guilt easily; the guilt is so easily transferred to the audience. This makes you feel uncomfortable, because of the guilt you feel for feeling sorry for Hanna. 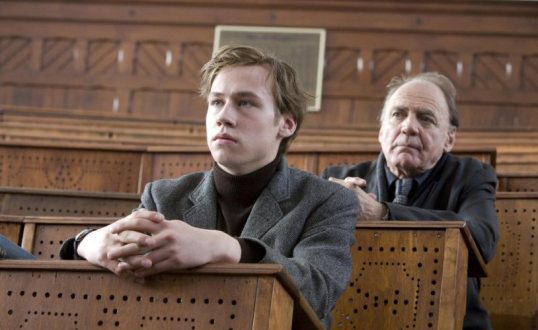 The whole time I was in Berg’s head, trying to figure out what the right thing to do was: ‘I surely shouldn’t feel sorry for a murderer… But I’ve only known her as a lover this entire time. I also know she’s being unfairly charged… But why should I care? She’s a murderer. But I’m a law student and fair justice comes first…’  As I said, it is a heavy film that stayed with me for days.

The film follows Michael Berg right the way through to when he’s middle-aged (Ralph Fiennes), showing how guilt and secrets have affected him later on in life.

The Reader will leave you with more questions than answers, which was the intention. You’re toying with your emotions just as much as Michael Berg is – what’s right and wrong, what punishment guilty people deserve and what they don’t, and when the truth should and shouldn’t be told.

Michael Berg: I have a piece of information, concerning one of the defendants. Something they do not admitting.

Professor Rohl: What information? You don’t need to tell me. It’s perfectly clear you have a moral obligation to disclose it to the court.

Michael: It happens this information is favourable to the defendant. It can help her case. It may even affect the outcome, certainly the sentencing.

Professor Rohl: So? …what we feel isn’t important. It’s utterly unimportant. The only question is what we do. If people like you don’t learn from what happened to people like me, then what the hell is the point of anything?

A fascinating watch. My wish is only that it wasn’t a romance/drama, and that is was a courtroom drama like A Few Good Men. It would have a totally different movie of course, but it was the courtroom scenes that were the most compelling.

I am a journalism graduate (2014) from New Zealand. Currently working in marketing, and writing fiction in my spare time. I love to write about movies on this blog when I can. I also do paid reviews and voiceovers via Fiverr (nzfilmfreak).
View all posts by NZ Film Freak →
This entry was posted in All Film Reviews, drama, romance and tagged Bruno Ganz, David Kross, drama, kate winslet, Lena Olin, Ralph Fiennes, romance, the reader. Bookmark the permalink.