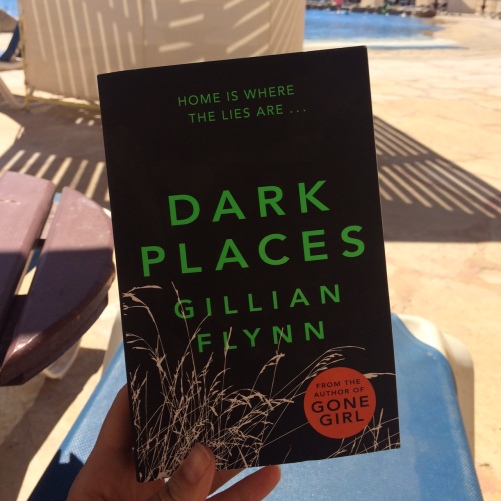 Writer: Gillian Flynn
Genre: Mystery/crime
Released: 2009
Blurb: Libby Day was seven when her mother and two sisters were murdered in “The Satan Sacrifice” of Kinnakee, Kansas. She survived—and famously testified that her fifteen-year-old brother, Ben, was the killer. Twenty-five years later, the Kill Club—a secret secret society obsessed with notorious crimes—locates Libby and pumps her for details. They hope to discover proof that may free Ben. Libby hopes to turn a profit off her tragic history: She’ll reconnect with the players from that night and report her findings to the club—for a fee. The unimaginable truth soon emerges, and Libby finds herself right back where she started—on the run from a killer.

After finishing Murder on the Orient Express on holiday, I moved on to Dark Places; a natural choice as I loved Gone Girl so much.

Dark Places is a story about a seven-year-old girl, Libby Day, who witnessed the massacre of her family. She testifies against her 15-year-old brother, who ends up in jail.

Libby is still deeply emotionally scarred by the murders 25 years on, and is struggling with depression, to pay bills, to even get out of bed in the mornings. When one day, she receives a phone call from a man explaining that there is a growing belief in the community that her brother is innocent.

With the motivation of getting a bit of desperately-needed cash by speaking to this man, she begins to question what happened that day. Did she really see her brother killing her family? Or was this man right, in that Libby was just a confused seven-year-old, guided by police and councillors to testify against her big brother?

She goes on a rocky, dark quest to discover the truth. Previously buried memories are remembered, and hidden clues are found.

This was certainly a very dark story. More horror than thriller in parts, particularly due to the satanic themes. So it’s not really a novel I would whole-heartedly recommend to everyone.

I certainly don’t think Dark Places should have a ‘if you liked Gone Girl, you’ll love this‘ kind of review. Because they’re both rather different.

However, it still has Gillian Flynn’s genius way of writing. You’re bouncing all over the place, between different characters’ points of view (which I LOVE), from before, during and after the murders, and not once are you lost or confused. How does she do it??

What I have learnt from Flynn’s writing is that she loves flawed characters. Same with Gone Girl; there’s no goodie and baddie, really. They’re all bad and all good in one way or another. Mostly bad. But still human enough to relate to them in some ways.

Prepare yourself for the bitter self-loathing you’ll endure because Gillian Flynn is such an amazing writer. So amazing that it seems totally unattainable to ever become half as good as her. It’s very annoying.

She has a talent of describing exactly what she means in such few words. From memory, a line that stood in my mind was when a character was trying to get another character’s attention in an intimidating way, and Flynn uses the word ‘needled’ to describe the sharp annoyance of the character’s persistence. Who would have thought to use that word? You get the whole picture in just one word! Genius.

I thought I couldn’t enjoy a book if I didn’t like the main character. Turns out, I can. I was hooked! It’s a classic ‘who dunnit’ mystery, laced with terror, gore and fear.

Overall, yes, you must read this. It’s fantastic. Gillian Flynn is a remarkably talented writer. But just prepare yourself for satanic sacrifices and horrific descriptions. It’s a bit full on.

Now that I’ve finished the book and started Googling about it, I realised there was a 2015 movie based on this book! Dark Places, the movie, features Charlize Theron (totally wrong casting right off the bat), which I will be watching this week. I’ll let you know if the poor reviews are accurate!

I am a journalism graduate (2014) from New Zealand. Currently working in marketing, and writing fiction in my spare time. I love to write about movies on this blog when I can. I also do paid reviews and voiceovers via Fiverr (nzfilmfreak).
View all posts by NZ Film Freak →
This entry was posted in All Book Reviews and tagged book, dark places, gillian flynn, gone girl, review, thriller. Bookmark the permalink.