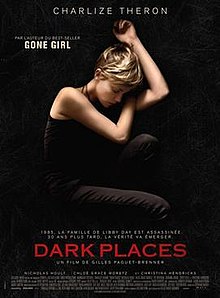 Why do I do this to myself? I read the book, then watch the movie. Of course I’m going to be disappointed.

As per the Gillian Flynn book of the same name, this is a story about a seven-year-old girl, Libby Day, who witnessed the massacre of her family. She testifies against her 15-year-old brother, who gets jail for life.

Libby is still emotionally scarred by the murders 25 years on, and is struggling with depression, to pay bills, to even get out of bed in the mornings. When one day, some random (Nicholas Hoult) gets in touch to explain there is growing belief that her brother is innocent.

With the motivation of getting a bit of desperately-needed cash by speaking to this man, she begins to question what happened that day. Did she really see her brother killing her family?

Basically, what was a layered and intriguing mystery in the book, becomes a simplified one-watch film. It’s really nothing special. It’s just a good-looking woman skulking about, and figuring out the mystery with very little effort.

Beyond this basic storyline, is my annoyance at the casting of Libby Day. Libby is a big-breasted, short, red-haired woman with a temper. She is not a tall, athletic, beautiful pixie-haired woman… In other words, Charlize Theron should not have been the main character. But she produced it, so she cast herself despite the obvious physical differences. She don’t care. #richpeoplelife

It’s just so annoying! The integrity of the story is weakened by this obvious disregard for the main character. Then again, have you ever heard of an average-looking Hollywood actor getting a main part in a movie? I guess there’s a bigger force at play here.

I was able to watch Dark Places while simultaneously doing multiple other things and still felt like I experienced what little impact there was to experience.

Overall, it’s an easy-watch (even though it’s not supposed to be).

I am a journalism graduate (2014) from New Zealand. Currently working in marketing, and writing fiction in my spare time. I love to write about movies on this blog when I can. I also do paid reviews and voiceovers via Fiverr (nzfilmfreak).
View all posts by NZ Film Freak →
This entry was posted in All Film Reviews, drama, Editor's Flops and tagged charlize theron, Chloë Grace Moretz, dark places, gillian flynn, Nicholas Hoult, thriller. Bookmark the permalink.