After hearing about Ocean’s Eight coming out, I decided it was time to watch the first instalment.

Actually, Ocean’s Eleven is a remake of a 1960s movie called Ocean’s 11 (number instead of word) featuring Frank Sinatra as the protagonist. I had no clue!

Ocean’s Eleven is a fun, shallow film about a star-studded cast who rob a casino. Why? Because Danny Ocean (George Clooney) has just got out of prison and doesn’t accept that his ex-wife (Julia Roberts) has moved on with a wealthy casino-owner. 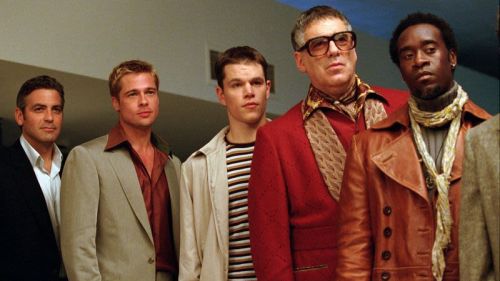 Hence why him and his former colleagues rob the casino, in order to try and win Danny’s wife back. How romantic.

It’s harmless fun, really, which is what the director wanted; enjoyment without embarrassment or cheese. It looks like everyone on set had a good time – and apparently their chemistry is all completely genuine! They hung out together, played pranks on Julia Roberts and even gambled together outside of shooting.

This is a short review because although I enjoyed it, I was hoping for a bit more comradery, a bit more comedy and more deep-and-meaningful moments. To be honest, I was expecting  The Parole Officer featuring cool Hollywood superstars.

Oh, and Don Cheadle as Basher was a terrible choice; his English accent was cringe-worthy. Otherwise, they should have just allowed him to be American! (Apparently Ewen McGregor was considered for his part initially.)

It’s a classic and I enjoyed it for what it was, but maybe it’s simply more of a man’s man film.

I am a journalism graduate (2014) from New Zealand. Currently working in marketing, and writing fiction in my spare time. I love to write about movies on this blog when I can. I also do paid reviews and voiceovers via Fiverr (nzfilmfreak).
View all posts by NZ Film Freak →
This entry was posted in action, All Film Reviews, Guys' Night In and tagged action, Andy García, brad pitt, george clooney, julia roberts, matt damon, Ocean's Eight, Ocean's Eleven. Bookmark the permalink.