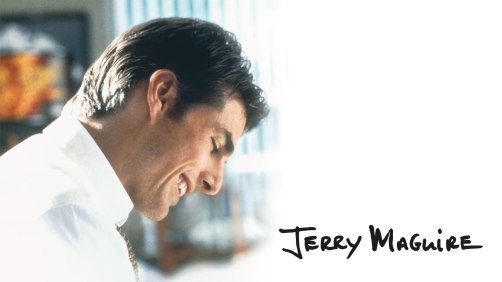 Show me the money!

It probably has a similar reputation as A Few Good Men where everyone knows the “You can’t handle the truth!” line, but not as many have seen the film it’s from. (Coincidentally they’re both Tom Cruise movies.)

This film is about a sports agent called Jerry Maguire who has an epiphany that results in him sending a late-night mission statement to everyone in the office. An inspired letter about perceived dishonesty in the industry and how they should work toward quality over quantity. However, in the morning that all too familiar, overwhelming warm wave of regret hits him. 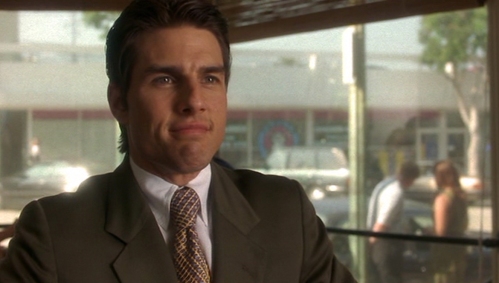 Management don’t like his new way of thinking, and organises a co-worker called Bob Sugar (Jay Mohr) to fire him. Suddenly, it’s a race against each other to secure all their clients – will they follow Jerry Maguire away from the company, or stick with Bob Sugar?

Along with a small handful of sports stars, the only co-worker to supports him is single mother Dorothy Boyd (Renée Zellweger) who leaves the company with him to start their own sports star representative company.

Jerry: [after having been fired] But if anybody else wants to come with me, this moment will be the ground floor of something real and fun and inspiring and true in this godforsaken business and we will do it together!

It’s fast-paced and hilarious, particularly when Jerry dwindles down to only one [very enthusiastic and loyal] sports star: Rod Tidwell (Cuba Gooding Jr.). He. Is. So. Funny. (Jamie Foxx auditioned for his part, but surely he would have been too serious to play Rod Tidwell?) 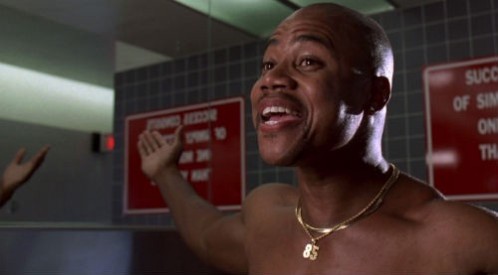 Usually Tom Cruise carries the film, but oh my Lord, Cuba Gooding Jr. is absolutely, undeniably the reason why this film can be watched on repeat.

Tom Cruise was a brilliant decision. Apparently the part was written for Tom Hanks, but he was too old by the time the script was finished. It was then assumed that Robin Williams would play the part, but I wonder if that would have been too much energy in conjunction with Cuba Gooding Jr..

I think Renee Zellweger was a solid choice because she looks so much more ordinary than a lot of women often cast as the love interest – I’m pleased they picked her over Winona Ryder! Apparently Renee was broke when she was cast and was very relieved to be working again.

While the romantic storyline is nice, I’m not convinced it’s essential and does occasionally put the breaks on the film.

Nevertheless, Jerry Maguire is a genuine must-watch. It’s romantic, it’s inspiring, it’s funny – a brilliantly smart drama that is perfectly cast. I love the themes of overcoming the odds despite being the underdog, I love how the film is about a failure while still having a dream, and the inspirational language all the way through it.

Particularly the cut-aways to interviews with a character called Dicky Fox, who parallels Jerry Maguire’s struggle with business advice.

Jerry : [Lying in bed one morning when suddenly the radio comes on and wakes him up with a jolt after having slept with Dorothy the night before]

[flash to Dickey Fox in his office]

Dicky: I love the mornings! I clap my hands every morning and say, ‘This is gonna be a great day!’

[flash back to Jerry Maguire who accidentally steps on a toy]

Jerry: [mutters]  I don’t believe this. How’d I get myself into this?

It’s a film that tells you ‘everything is going to be okay, and here’s why’.

Dicky: Hey, I don’t have all the answers. In life, to be honest, I failed as much as I have succeeded. But I love my wife. I love my life. And I wish you my kind of success.

Exploring frustration, desperation and acting on impulse, this is a highly satisfying film that you must watch. It’s about standing up to ‘the man’, it’s about doing what you want to do, it’s about staying positive and keeping your dignity and morals along the way.

I am a journalism graduate (2014) from New Zealand. Currently working in marketing, and writing fiction in my spare time. I love to write about movies on this blog when I can. I also do paid reviews and voiceovers via Fiverr (nzfilmfreak).
View all posts by NZ Film Freak →
This entry was posted in All Film Reviews, drama, Editor's Pick and tagged Bonnie Hunt, Cameron Crowe, Cuba Gooding, Jay Mohr, jerry maguire, Jerry O'Connell, Jr. Renée Zellweger, Kelly Preston, tom cruise. Bookmark the permalink.