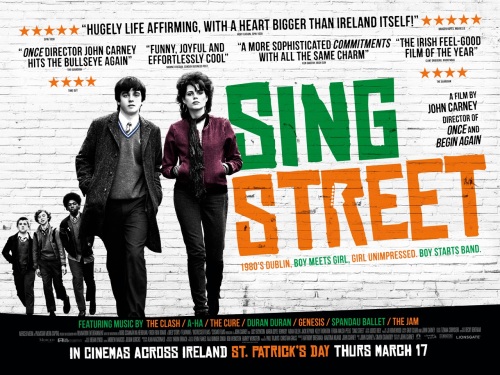 I was dubious about this film at first, I was thinking ‘any second now it’s going to take a turn for the worse’. But it didn’t! It was actually a very uplifting film from beginning to end.

I love movies about a likeable and naive underdog – like About a Boy or Driving Lessons – but coming-of-age films with a great soundtrack like this one is even better. The songs are so catchy!

It’s very similar to The Commitments as it follows the story of a band of young Irish musicians in the 1980s/1990s. But Sing Street has a more definitive love story and protagonist. I really enjoyed it!

Darren: What does “happy-sad” even mean? How can we be both things? It makes no sense.
Conor: It means that I’m stuck in this shithole full of morons and rapists and bullies, and I’m gonna deal with it, okay? It’s just how life is. I’m gonna try and accept it and get on with it, and make some art.

Protagonist Conor (Ferdia Walsh-Peelo) is sent to a new school as a result of his parents breaking up. It that wasn’t bad enough, he is already getting picked on by students and teachers at school. Conor soon meets a young, aspiring model (Lucy Boynton) hanging around the school, who he tries to impress by saying he’s in a band. As a result, he immediately tried to recruit people to be in his band.

Brendan: This is life, Conor. Drive it like you stole it. 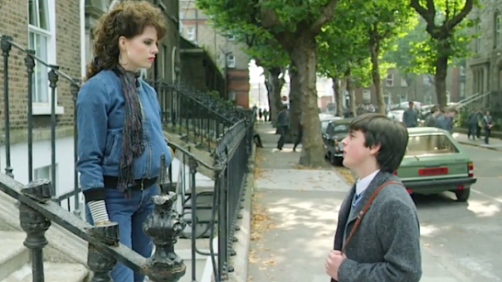 The band is a bunch of misfits and underdogs, which I just love! It’s so funny.

Sing Street would particularly appeal to those who love 1980s pop or who love stereotypical 80s fashion. But even if you don’t like either of those things, you’ll love the humour in this film. It’s Irish humour like in Black Books or Calvary.

An easy-to-watch film about people who win at life by not giving up, and continuing to pursue their dreams. A real pick-me-up.

I am a journalism graduate (2014) from New Zealand. Currently working in marketing, and writing fiction in my spare time. I love to write about movies on this blog when I can. I also do paid reviews and voiceovers via Fiverr (nzfilmfreak).
View all posts by NZ Film Freak →
This entry was posted in All Film Reviews, comedy, coming of age, Date Night Movies, drama, Editor's Pick and tagged Aidan Gillen, comedy, coming of age, drama, Ferdia Walsh-Peelo, Jack Reynor, John Carney, Kelly Thornton, Lucy Boynton, Maria Doyle Kennedy, musical, sing street, the commitments. Bookmark the permalink.