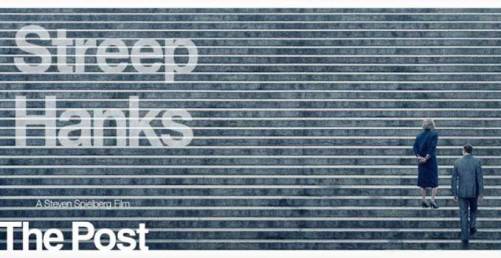 The Post comes across as a film with similar emotional impact to the likes of Spotlight (a highly recommended investigative journalism movie), but it sorely missed the mark.

It follows the real-life story of the Washington Post in the 1960s, a paper passed down to  Katharine Graham (Meryl Streep) who is struggling to keep the company financially afloat. Then, a big story breaks as government secrets relating to the Vietnam war are leaked – this massive story could make or break the paper.

But with the New York Times already being threatened with legal action for publishing only part of the information now available, Katherine is reluctant to allow editor-in-chief  Ben Bradlee (Tom Hanks) to publish the story for fear of bankrupting the paper. Meanwhile, she is fighting the emotional turmoil of being a woman in a man’s world.

The movie opens with a scene of the Vietnam war, which was definitely not required and I believe it was only included to pay homage to Stephen Spielberg’s Saving Private Ryan success. So that kicked this film off poorly.

Then it was about an hour of long, dry dialogue, which I struggled to pay attention to. So I’m not entirely sure if they explained what the government secrets were specifically, but I’m pretty sure the gist was that the government knew the US would lose the war but continued to send troops for fear of being embarrassed. But I don’t see how that could have taken an hour to explain… Maybe I missed something.

The second half of the film focussed on gender inequality and women’s rights as it follows Katherine, who slowly becomes more self-confident as she learned the ropes of running the paper after her husband’s death. She is spoken down to by colleagues, which makes the decision of publishing the leaked information or not even more difficult to make.

The cast was great of course. Meryl Streep is amazing and Tom Hanks is his usual great self, but did come across as more ‘family man’ than ‘tough editor’. I do wonder if Bryan Cranston was considered for this role due to the amount of Breaking Bad actors featured (Bob Odenkirk and Jesse Plemons). I think his darker domineer would have come across well.

Overall, the exciting, fast-paced and emotionally-charged storyline that I was expecting was not there. Just a ton of unnecessary dialogue and a story that didn’t portray the risk and stress of the situation very well.

I am a journalism graduate (2014) from New Zealand. Currently working in marketing, and writing fiction in my spare time. I love to write about movies on this blog when I can. I also do paid reviews and voiceovers via Fiverr (nzfilmfreak).
View all posts by NZ Film Freak →
Gallery | This entry was posted in All Film Reviews, drama and tagged Bob Odenkirk, Bradley Whitford, Bruce Greenwood, Josh Singer, journalism, Liz Hannah, Matthew Rhys, meryl streep, Sarah Paulson, steven spielberg, the post, tom hanks, Tracy Letts. Bookmark the permalink.