I love coming-of-age films. It’s the perfect mix of dark drama and bright comedy, against the backdrop of real-life circumstances and down-to-earth characters. Here are a few of my favourites:

American Graffiti
“I’m getting out of this turkey town! You can’t stay 17 forever.”
My number one favourite film forever. The night in the life of 1960s teenagers who have just graduated high school. They have one last night before they all go their separate ways. Some are moving away for university, some are hoping to settle down and others are wanting their high school career to continue by day along with the iconic culture of ‘cruising’ in their candy-coloured scream machines on the roads by night. To tie everyone in is radio personality Wolfman Jack. Legend.

Brooklyn
“I wish that I could stop feeling that I want to be an Irish girl in Ireland.”
“Homesickness is like most sicknesses. It will pass.”
Another one of my absolute favourite films – it’s so humbling. Saoirse Ronan is a brilliant actor whose character, Eilis, moves from Ireland to Brooklyn during the fifties. She grows from an innocent and naive girl into an independent young woman out of necessity who creates a life for herself. The lady Eilis lives with in Brooklyn is played by Julie Walters, who is essential to keeping this deep movie very funny. 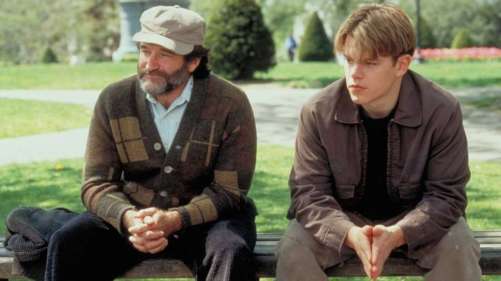 Good Will Hunting
“How do you like them apples!”
This is a beautifully touching film about a genius who refuses to reach his potential. Coming from a rough neighbourhood, Matt Damon’s character is quick to get into fights and back into handcuffs. But Robin Williams’ character is soon able to crack his mask to reveal a scared and unhappy boy. 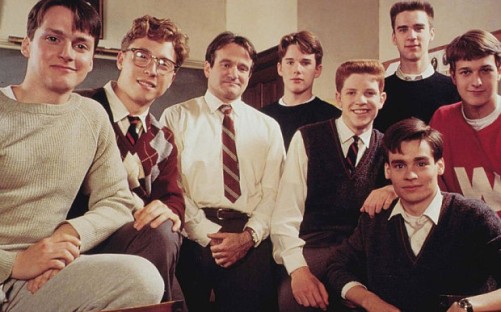 Dead Poets Society
“…medicine, law, business, engineering, these are noble pursuits and necessary to sustain life. But poetry, beauty, romance, love, these are what we stay alive for.”
It follows the internal struggles of boys at a private boarding school who are wrestling between being themselves while pursuing their dreams and pleasing their prestigious fathers. Again, Robin Williams’ character acts as a mentor to these students, but he’s not able to save them all.

The Skeleton Twins
“I can’t wait to be the creepy gay uncle.”
“You’re hired!”
This film is about Bill Hader and Kristen Wiig as suicidal siblings Milo and Maggie. Yeah, it’s a bit of a downer but weaving through the tragedy are sarcastic come-backs that will make you belly-laugh. While coming-of-age films are typically about teenagers growing up, I think this movie can be included because they’re twins who are rediscovering themselves and each other, delving into their childhoods and overcoming their troubles.

About a Boy
“Oh, no… it’s just I thought you had hidden depths.”
“No, no, you’ve always had that wrong about me. I really am this shallow.”
This is my favourite Hugh Grant film because while he still plays the self-obsessed a-hole, he does so in a comedic way with a three-dimensional character. It’s a traditional coming-of-age story for the young boy Marcus, but it’s also about Hugh Grant’s character growing up and realising that being part of a family isn’t a bad thing. They both grow together and learn from each other.

Driving Lessons
“To wit, I leave you with this quote penned by my dear friend, William Shakespeare: ‘When the shit hits the fan, get a tent’.”
Such an underrated coming-of-age film – I doubt many people have ever heard of it. It features Rupert Grint and Julie Walters and follows a storyline similar to that of About A Boy and Scent of a Woman (as explained in my blog post One Story, Six Movies) where an older person and a younger person bond and learn from each other. But I love Driving Lessons in particular because it’s so funny – classic English humour. Julie Walters is brilliant.

Scent of a Woman
“Oh, where do I go from here, Charlie?”
“If you’re tangled up, just tango on.”
Forever a favourite of mine. It’s quite dark in places as it follows Al Pacino’s blind character, Colonel Slade, who is struggling with depression. He is an experienced soldier and a wise man, who has a story to tell. Chris O’Donnell’s character is young Charlie who is hired as Colonel Slade’s aid for a thanksgiving weekend, he is kind but very naive. He is reluctantly dragged to New York with The Colonel, but learns a lot along the way. They both help each other out profoundly.

The Commitments
“The success of the band was irrelevant… Sure we could have been famous and made albums and stuff, but that would have been predictable. This way it’s poetry.”
The Commitments is about a group of teenagers who all have troubles at home, but come together to make incredible music. While they don’t ‘make it’, their trumpet-player is quick to remind them that they may not have created history, but they’ve created poetry. 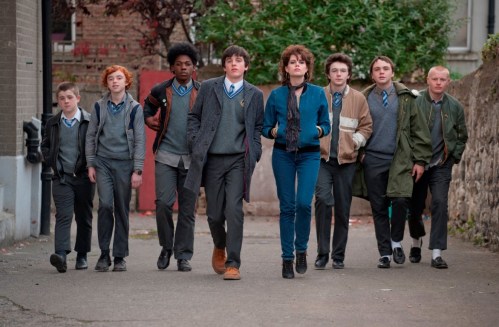 Sing Street
“This is life, Conor. Drive it like you stole it.”
Sing Street is similar to The Commitments as they’re both Ireland-based movies about a group of teenagers forming a band. This film is about a new boy at school who starts a band to impress a girl. Meanwhile, he tries to deal with his parents’ divorce with his brother being his only emotional support.

Little Miss Sunshine
“A real loser is someone who’s so afraid of not winning he doesn’t even try.”
A family are trapped in an old yellow Volkswagen van as they drive across the country. The family consists of a dad who is a failed motivational speaker, a mother at the end of her tether, a grandad drug-addict, an suicidal uncle, a son who refuses to speak and a little girl who is just wanting to enter a beauty contest. It is a light-hearted storyline about a family overcoming their obstacles and coming together for the sake of family.

About Time
“…worrying about the future is as effective as trying to solve an algebra equation by chewing bubble gum. The real troubles in your life will always be things that never crossed your worried mind.”
Such a beautiful film. About Time is one of the best feel-good comedy/dramas out there. It’s about an innocent and quiet boy called Tim Lake (Domhnall Gleeson) who at the humble age of 21 is told by his father (Bill Nighy) that, like every man in his family, he can travel back in time. It follows his life and the decisions he makes along the way, which touches on love, death and birth. It truly is a lovely almost auto-biographical film.

The Breakfast Club
“We’re all pretty bizarre. Some of us are just better at hiding it, that’s all.”
A day in the life of 1980s teenagers who have ended up in detention for various reasons. Starting the day out as enemies they end the day with an acceptance of each other. The bully, the jock, the nerd, the popular girl and the goth grow over the course of the day through various funny and serious scenes as they begin to work together to gang up on the teacher.

The Way, Way Back
“There’s a whole world out there for you, Duncan. Don’t settle. Not yet.”
Duncan is a 14-year-old boy who is forced to go on a summer holiday with his mum and her boyfriend. But her boyfriend is an utter dick, and just an overall bully to him so Duncan gets a job at the local water park where his boss becomes a bit of a mentor. The water park because his escape while he figures out what to do with his life.

The Perks of Being a Wallflower
“C minus, ladies and gentlemen! I am below average!”
The trailer portrays this film as a fun-loving and laid-back, but it’s actually got very dark undertones. The three main characters (Sam, Charlie and Patrick) are all hiding dark secrets – bulimia, child molestation and being gay. Their friends around them are all struggling with certain issues too – stealing, struggling with academia and popularity. The three main characters all help each other through their difficult stages in their lives as they grow up and mature. 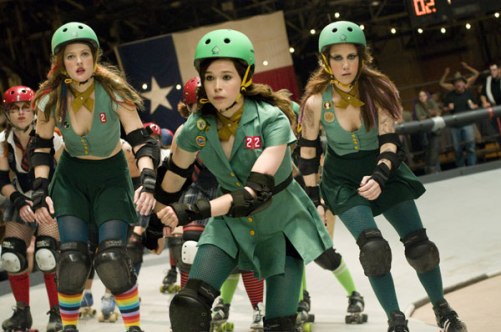 Whip It
“So, what are you, like, alternative now?”
“Alternative to what?”
A teenage girl called Bliss is trying to break away from her mother’s 1950’s-style parenting. She straps on roller skates and joins a roller derby team, where she finds security and support in her teammates. She slowly matures as she embraces the culture of the roller derby scene – surrounded by misfits and the unwanted.

Juno
“No, this is not a food baby all right? I’ve taken like three pregnancy tests, and I’m for shizz up the spout.”
A carefree 16-year-old tomboy gets pregnant with her best guy friend, they decide to adopt the baby out to a couple who can’t have children. It sounds kinda icky and lame, but Juno is so funny with her immature comments and how she gives a reality check to adults. While Juno has found herself in a very adult situation, the potential adoptive father is rediscovering his youth and becomes reluctant to adopt. I guess it’s about never wanting to grow up.

13 Going on 30
“I like your dress.”
“That’s because I have these incredible BOOBS to fill it out!”
While this is a coming-of-age film in the most literal sense, it’s far more light-hearted than my other selections. There’s no themes of suicide or drug-use, the tragedy isn’t as dark and the characters aren’t as relatable. Nevertheless, Jennifer Garner does a brilliant job of playing a 13-year-old in a 30-year-old’s body.

Just realised how many of the same actors are in coming-of-age movies. Kristen Wiig, Ellen Page, Julie Walters, Robin Williams and Toni Collette are regulars of the genre, maybe because they’re so ‘real’ and relatable.

I guess the common themes of the coming-of-age genre include characters who are in the process of growing – typically growing from a teenager into an adult, but it also includes characters who experience profound change or growth well into their adult years.

Coming-of-age storylines carry dark tragedy as well as light-hearted comedy, which is why they’re so relatable and enjoyable. They reflect real life with flawed characters and unsatisfactory circumstances, with a lot of inner-turmoil to be sorted out.

They also include a young naive character and an older mentor. Both have flaws and both help each other to grow.

I am a journalism graduate (2014) from New Zealand. Currently working in marketing, and writing fiction in my spare time. I love to write about movies on this blog when I can. I also do paid reviews and voiceovers via Fiverr (nzfilmfreak).
View all posts by NZ Film Freak →
This entry was posted in A Few of My Favourite Things, coming of age, Extras, Take Five and tagged 13 going on 30, american graffiti, coming of age, dead poets society, good will hunting, juno, little miss sunshine, sing street, the breakfast club, the commitments, the perks of being a wallflower, the skeleton twins, the way way back, whip it. Bookmark the permalink.