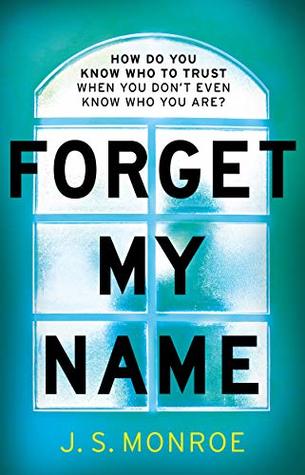 Writer: J.S. Monroe
Genre: Mystery/crime
Released: 2018
Blurb: How do you know who to trust when you don’t even know who you are?
You are outside your front door. There are strangers in your house. Then you realise. You can’t remember your name. She arrived at the train station after a difficult week at work. Her bag had been stolen, and with it, her identity. Her whole life was in there – passport, wallet, house key. When she tried to report the theft, she couldn’t remember her own name. All she knew was her own address. Now she’s outside Tony and Laura’s front door. She says she lives in their home. They say they have never met her before.
One of them is lying.

This was one of those books that I just took a punt on: I plucked it off the shelf and bought it without any research at all.

I read the synopsis and was captivated enough to read the first page of it in the shop. Then the second. Then the third… So I bought it. (As Tim Weaver mentioned in an interview once, it’s important to find an author who writes how you like to read, and this author certainly does!)

It’s another one to add to the Girl on the Train/The Couple Next Door/Gone Girl band wagon to be honest. It’s a psychological thriller with a twist (or two)!

Forget My Name is about a woman who has has forgotten who she is. All she remembers is how to get home from the airport she’s found herself at. But when she arrives at the house that she recognises, she finds two people living there who say that they’ve lived there for several years. They kindly take her in until she can recall more of her life and figure out what has happened.

It certainly gets the cogs turning as it’s a very mysterious story indeed!

Sadly though, there are a few times where my suspense of disbelief was tested with the intriguing twists becoming unexpected u-turns. The story didn’t continue in the direction I’d hoped for as there were a few left-field story arcs.

Nevertheless, it was a page-turner and was good enough for me to recommend to others.

I particularly love the way it was written with the perspective of the different characters alternating between chapters.

It’ll keep you guessing from start to finish, but you’re not going to figure it out!

I am a journalism graduate (2014) from New Zealand. Currently working in marketing, and writing fiction in my spare time. I love to write about movies on this blog when I can. I also do paid reviews and voiceovers via Fiverr (nzfilmfreak).
View all posts by NZ Film Freak →
Gallery | This entry was posted in All Book Reviews and tagged book, book review, forget my name, js monroe, thriller. Bookmark the permalink.