Stan & Ollie is a film based on comedy duo Laurel and Hardy.

It doesn’t follow the typical story line of a biopic of following the protagonist’s life from childhood through to death. Rather, it focuses more on Laurel and Hardy’s (Steve Coogan and John C. Reilly) friendship.

The relationship they had was not only heartwarming, but combined with the backdrop of the thirties and fifties, you’re left longing for simpler times where human interactions were not interrupted by technology.

The movie follows the ups and downs of the ageing duo, who are struggling for money as their careers on the stage and in front of the camera are winding down.

It’s heartbreaking watching the two struggle, especially with their manager (Rufus Jones) taking advantage of their need to earn money.

While you don’t need to have watched any Laurel and Hardy skits, I would strongly recommend it as you’d then get the subtle references throughout the movie.

John C. Reilly and Steve Coogan were the only choices possible for the roles of Laurel and Hardy – they truely were brilliant! They even went as far as learning the mistakes that the real Laurel and Hardy made in the films. Such a cool touch!

Their wives Lucille Hardy (Shirley Henderson) and Ida Laurel (Nina Arianda) were a shadowing comedy duo themselves. They were so much more than background characters as they were almost as much a part of the story as their husbands. They really did make me laugh! 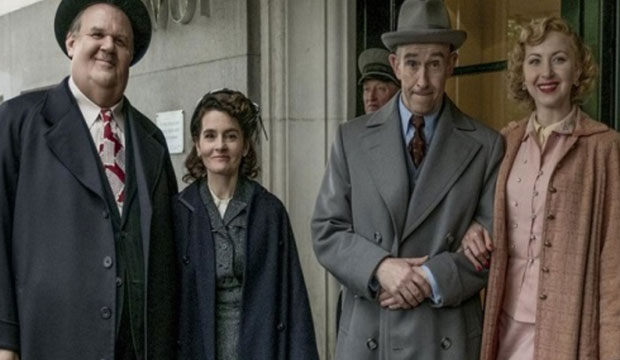 I was going to include the quotes that made me laugh, but I’ve realised it’s actually how the lines were delivered that made me double over!

If you’re looking for a warm film that makes you laugh as much as it makes you cry, then you must watch Stan & Ollie.

You will choke up but still splutter out a giggle through your tears.

I am a journalism graduate (2014) from New Zealand. Currently working in marketing, and writing fiction in my spare time. I love to write about movies on this blog when I can. I also do paid reviews and voiceovers via Fiverr (nzfilmfreak).
View all posts by NZ Film Freak →
This entry was posted in All Film Reviews, comedy, drama, Editor's Pick and tagged Danny Huston, John C. Reilly, Laurel and hardy, Nina Arianda, rufus jones, Shirley Henderson, stan and ollie, Steve Coogan. Bookmark the permalink.