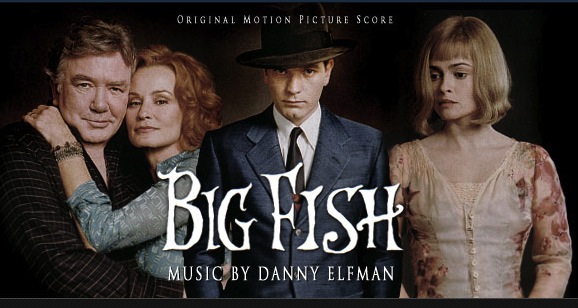 I have mentioned this movie in quite a few other posts, relating it to Forrest Gump and The Curious Case of Benjamin Button because of their similar stories about an average  man on his adventure through life.

Big Fish is directed by Tim Burton, so already you have probably got an idea of what the feel of this film is. A little bit quirky with gothic undertones, but don’t be fooled, this is not a cookie-cutter Burton film (although it does include the incredible Helena Bonham-Carter), this is an amazing tale about Edward Bloom’s (Albert Finney/Ewan McGregor) life.

The protagonist is a storyteller although he is known to exaggerate and embellish the story of his life with fantastical metaphors and unbelievable occurrences. Just like Forrest Gump, Edward is a Southern man who finds himself on a road of various adventures, finds love and goes to war.

But Big Fish is a more light hearted and fantastical version where you’re not quite sure what to believe to be true. Edward Bloom’s stories take up most of the film, but it also tells the story of his son, William Bloom (Billy Crudup).

He goes on a journey of his own, retracing his father’s footsteps to find out the real story behind all of Edward’s fabricated tales. The contrast between reality and fantasy makes the story more believable. The facts would have made uninteresting tales, whereas the elaborate stories are entertaining and unbelievable.

I love this piece of dialogue where William’s fiancé Josephine (Marion Cotillard) speaks to William Bloom about how he met is wife, Sandra (Jessica Lange/Alison Lohman). I love Bloom’s way of speaking!

Edward Bloom: Your mother-in-law was never supposed to marry me.  She was engaged to somebody else.
Josephine: I never knew.
Edward Bloom: Will never told you? Probably just as well. He would have told it wrong, anyway. All the facts, none of the flavor.
Josephine: Oh. So this is a tall tale.
Edward Bloom: Well, it’s not a short one.

This clip should give you a good idea of the feel of the movie:

The music is fantastic in Big Fish. There is Elvis Presley, Buddy Holly and Pearl Jam as well as the compositions by the infamous Danny Elfman (who incidentally cannot read music!)

Fate, destiny, time, love and death. From real life giants and lion tamers to mermaids and witches, Big Fish is a fantasy/adventure/drama movie, but with a make-believe glaze over it.

It is a story of great imagination which you will want to watch over and over again and read further into the details. It’s entertaining but also pulls on the heart-strings.

Just noticed they have used the same piece of music from Tim Burton’s Edward Scissorhands… and another piece of music I recognise from Black Beauty in this trailer! All of these movies have the same composer though; Danny Elfman.